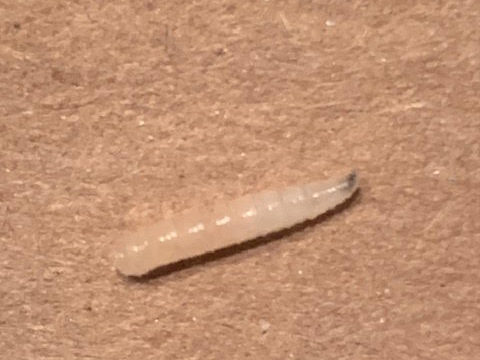 White Worm Found in Nose Could be Harmless Larva, Though Medical Consultation is Advised

“I had a horrific feeling of something crawling up my nose”, begins this reader in her submission about the worm-like creature pictured below. “I blew my nose continuously and it still hurt. When I breathed in, it hurt. I sneezed and sneezed. Finally, I blew out this tiny worm, white/beige: it had a sharp point at the end. I felt intense relief. I had no other symptoms. It is about 1 cm (0.4-inches). It was very much alive! Now, I am paranoid that I am infested with pupae. Do you think this could be a one time event? We live in the country, deep in the woods, in the South. We do have all sorts of insects around. I do my best to keep them out of the house. I will enclose a picture. Thank you so much!” 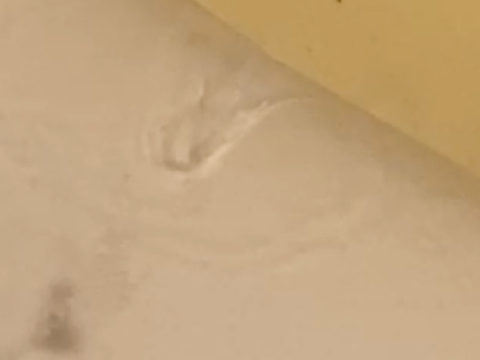 Silvery Shapes in Toilet Cause Concern

“I found these silvery things moving at the bottom of my toilet bowl when I urinate,” states this reader in his submission regarding the translucent shape pictured below. “I thought it might just be the warmer liquid mixing with the cooler liquid – it kind of swirls. I’m gonna attach a video. Oh, by the way, I’m in Dallas Texas but was in the Navy and have traveled to many countries. I apologize for the language.” Firstly, we want to thank our reader for his service and let him know that the language is absolutely fine: we want our readers to be as direct as possible when they give us the context of their situation, as it helps us get the clearest grasp on the situation we can get. Secondly, we must say that this does not resemble any organism that we know of. It really does just look like swirls of liquid. 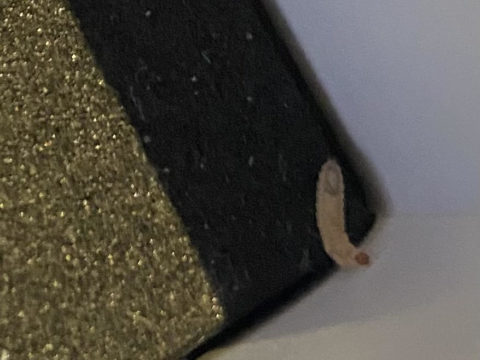 White Larva-like Creature has This Man Worried About Intestinal Parasites

“I live in Toronto, Ontario, and was wondering if you could identify this worm/larvae”, states this reader about the white worm-like creature pictured below. “This small larva, which is approximately half an inch in length, was found in the bathroom and may have been an intestinal parasite (due to how it was discovered). It moves quickly and seems to have six small appendages and a segmented upper body. It has a small reddish brown “head.” It looks closest to a clothing moth larva, but the body shape is not the same and it is physically flatter. Any help would be greatly appreciated.” Now, since our reader states that he thinks it may be an intestinal parasite, we cannot identify this organism for him. This is because we are not medical professionals, and are thus not qualified or legally able to identify any organisms that affect the health of humans or animals. 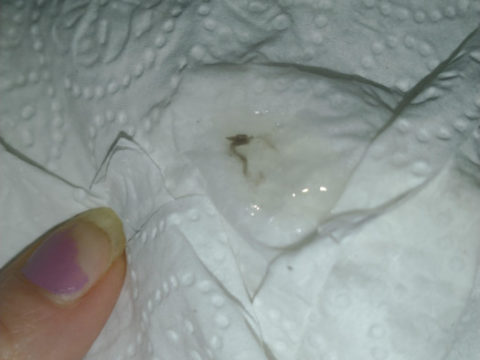 Twisted, Black Organism Coughed Up by This Woman Seeking Answers

“Can you identify this please?” asks this reader in her submission regarding the minuscule, black, twisted-looking organism pictured below. “This was coughed up”, she explains, though she does not add anything else in her submission. Regardless, we will not be able to identify this organism, and the reason for this is because it came from her body. Any situation in which an organism comes from a person or animal’s body must be presumed to be medical in nature, as we cannot risk making an identification that will be misconstrued as a diagnosis. Since we are not medical professionals, we are neither qualified nor legally able to make these kinds of identifications in the first place. What we can do is point our reader in the direction of some resources she can use to find someone that is qualified to answer her questions and identify what came out of her nose. 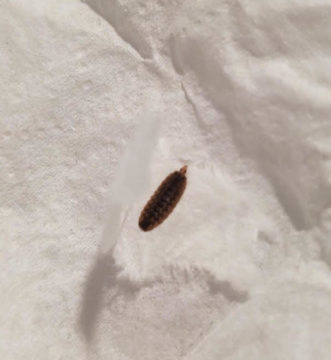 Segmented, Brown Creature Found on Toilet Paper Could be a Duff Millipede

“I have been trying to find someone to identify what type of worm this is”, states this reader in her submission regarding the segmented, brown creature pictured below. “It is possible that it was stuck to my clothes or even the toilet paper, but I found it when wiping. I went to the doctor and the ER and they couldn’t figure out what it was either. I searched the site and found some that look like it, but I’m not 100% sure since this one had markings and I couldn’t seem to find any with similar markings.” Based on the picture alone, we would have concluded that this is a duff millipede. These critters feed on decomposing organic matter such as fungi and algae, and are not harmful to humans. Typically, they live in tree bark or under nettles, but they have been known to invade people’s homes. Like most species of millipedes, they will do this if the conditions outside grow to warm and dry, which is why they typically seek shelter in basements or garages, where it is cool and dry. 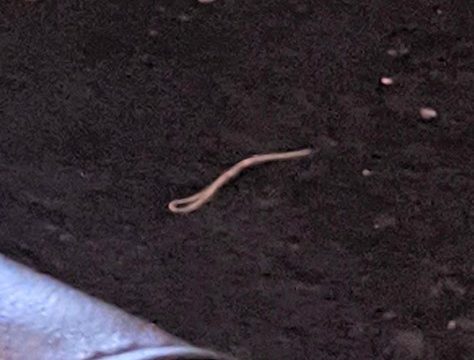 “I found this in my home”, states this reader about the long, white worm-like organism pictured below. “I have been tortured lately by some unknown “thing” in my house. May it be bugs, worms, or something else; I found this when I woke up after a very rough night. I got a ton of bites on me. I’m not sure what’s going on but please give advice. Any is helpful. I know you can’t give medical advice but if you can try to identify the possible “worm” pictures that would be great. I was leaning towards a tapeworm possibly. Thank you for your time.” 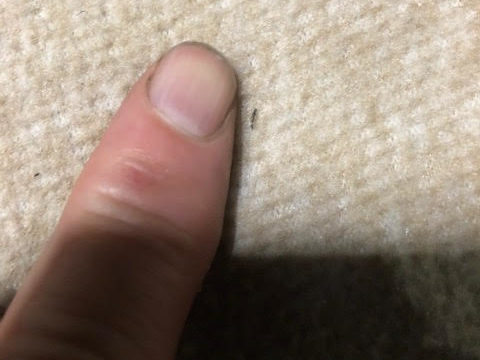 “I picked what seems to be some type of small black worm and maybe a mite”, writes this reader in his submission regarding the minuscule organism pictured below. “Their bite can be painful and they are penetrating and seem to be nesting in my skin. I cannot find what they are and I have tried everything. I have tea about biting bugs to get rid of them. 200 degrees heating of my semi, 140 degree heating of my clothes: they live through the wash. Please help me as I am infested.” First things first, we need to make clear that we will unfortunately not be able to identify these creatures. This is because our reader has made it very clear that they are infesting his body and causing health problems for him. As such, we can only assume the situation is medical in nature. Since we are not medical professionals, we are neither qualified nor legally able to identify organisms that cause such issues, because doing so would be tantamount to providing a diagnosis, and taking a non-medical professional’s medical advice can do more harm than good. 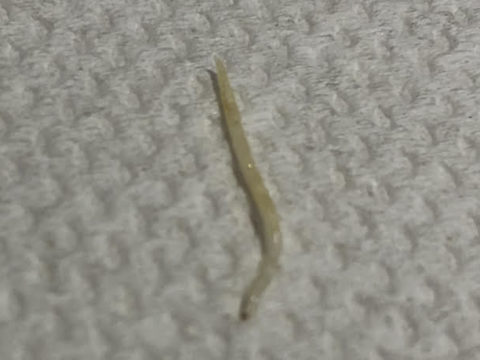 “I found this worm on the hardwood floor in the living room”, states this reader in her submission regarding the white worm-like creature pictured below. “It’s just under an inch in length. Very thin. One end appears to have a darker end (possibly the eyes/head). I recently got a rabbit. Thought maybe it was a pinworm/threadworm but haven’t seen anything like this before. The rabbit’s cage was clean with no signs of worms.” Now, a thin, white larva with a brown head is about as generic of a description of a worm-like creature as you can get, but nonetheless we have identified this as a stiletto fly larva. 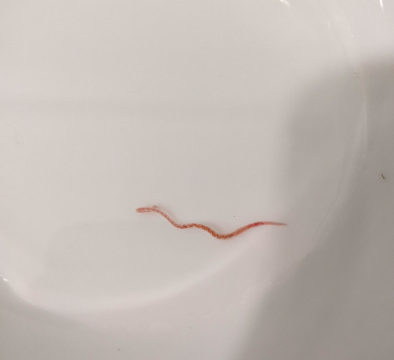 “Can you identify this worm found in my toilet bowl after peeing?” asks this reader in her submission regarding the red, semi-transparent worm pictured below. “Doctor I visited was very uncertain but suspected it was a schistosoma.” 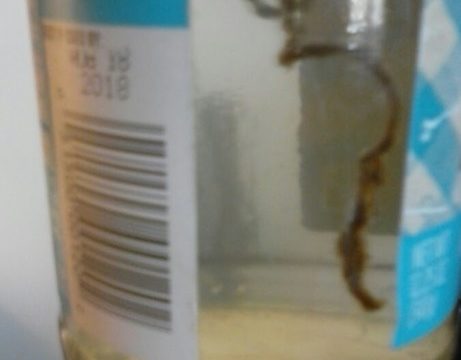 Victim of Long Struggle with Parasitic Infection Shares Their Story

“Why is no one in the medical community helping us?” asks this reader in their submission regarding parasitic worms. “The reason why no one knows about these things, especially doctors, is a mystery to me. I have been throwing them up for eight years, four to five hours a day.” 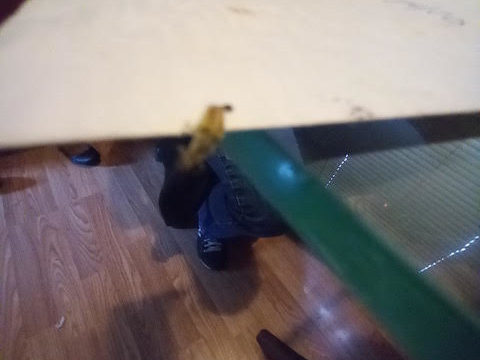 “Can you identify this bug?” asks this reader in his submission regarding the yellow-green creature pictured below. “I have been having a problem with parasites and no one believes me, so I bought an over-the-counter anti-parasitic medication and then I felt this crawling from under my shirt.” 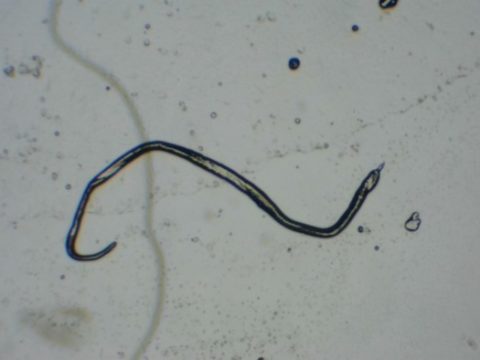 “Have you ever seen this before?” asks this reader in her submission. “I KNOW I have some sort of intestinal parasite, and my doctor agrees.”

Fluke Eggs: A Short Look Into This Parasitic Flatworm

“What do fluke eggs look like?” is all this reader asks in his submission. No photos are attached, but that would make sense, given that the answer to our reader’s question is that fluke eggs are microscopic.

“Please help, I’ve been plagued by this for eight years!” states this reader in her submission to us. “I lost my hair. It’s in my nose, mouth, ears, eyes, and stomach. I’ve lost my children because they said I had delusional parasitosis?”

Man with Mite or Worm Under Skin Seeks Help

“I have some kind of mite or worm under my skin and need help finding out what it is”, is all this reader states in his submission, which is also lacking in photos. Generally speaking, it is incredibly difficult for us to identify organisms without sufficient context or photos, but in this case, we will unfortunately not be able to help our reader in any case. 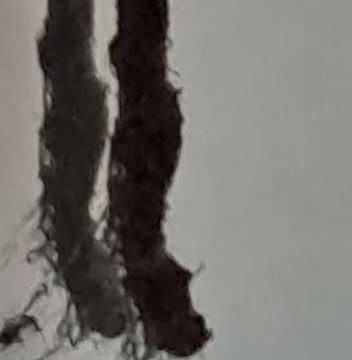 Family in New Zealand Dealing with Parasites Reaches Out for Help

“Hello we are based in New Zealand and have had problems with a type of parasite, but we don’t know what it is”, states this reader about the black, spiky organisms pictured below. “We have already gone to medical professionals. We are deemed crazy yet have got multiple photos and samples.”

“What is this worm in my head and where can I get blood work done?” asks this reader in her submission. “Doctors have me as delusional parasites. You can see it’s a worm. It has been two years. Thank you.” 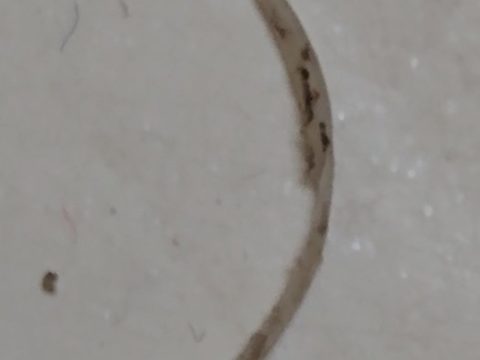 “I have been dealing with these things in my nose and in my mouth above my dentures”, states this reader in Northeast Florida. “Please tell me what they are”, she requests, asking about the multitude of organisms pictured below. 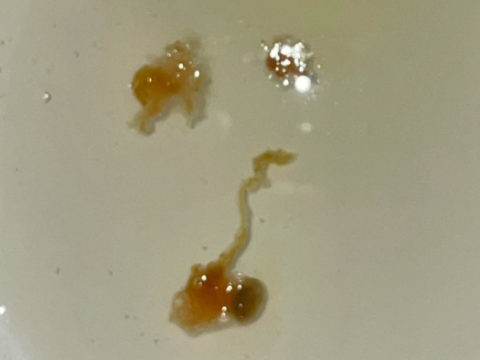 Man Finds Potential Organisms in Toilet After Two Weeks of Bowel Problems; Where He Can Go For Help

“What is this?” asks this reader about the organism in the photograph below. Our reader states that he has been having diarrhea for two weeks and this, brow-green organism came out the day he sent in his submission. 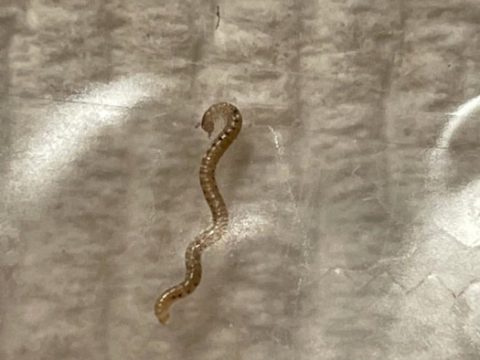 Mother Worries About Pinworms After Finding a Segmented, Green-Gray Worm in her Bathtub

“This one centimeter-long worm-like creature was found in my mother’s tub today and on a few previous occasions”, says this reader about the segmented, green-gray creature in the photograph below. Our reader’s mother is concerned that these are pinworms, and our reader wonders if we can verify whether or not these are millipedes, centipedes or indeed pinworms.