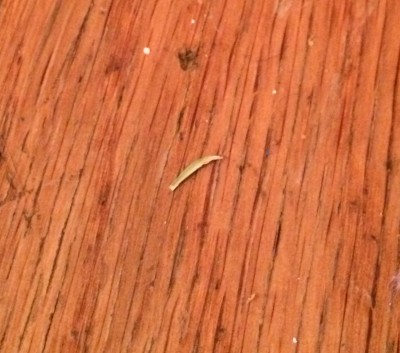 “There appears to be a worm on the floor along with white dots that are eggs I guess,” states this reader, who thinks she may have found pinworms in her home. The worms in question appear to be white in color, with a flat body. 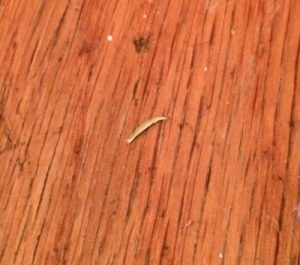 Our reader states that there was also a film ‘left behind by the worms, and that if she scrubbed it, she would find additional eggs. It was for that reason that she thought they were pinworms. Her question to us is if pinworms are able to infest one’s entire home, including one’s attic, and also if they can “eat into” wood, porcelain and ceramic. For our readers who do not know, pinworms are intestinal parasites most common in children. They can indeed infest a home as well as its residents, as they are capable of living outside and inside the body. Humans normally contract them during sleep, as pinworms will enter the body at night and crawl up the intestinal tract to lay more eggs. It is true that pinworms can also lay eggs outside of the body, but they are microscopic, and cannot be detected with the naked eye. Why our reader made the connection between an egg-filled film and pinworms we do not know, but we can tell our reader now that the film with the eggs was not created by a pinworm. Whether or not the worm in the photograph is a pinworm is another question, but assuming that this worm is the one leaving visible eggs behind, then we would say the worm is also not a pinworm. 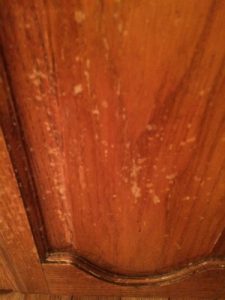 That being said, if our reader has cause to believe that she, or anyone else in her household, is infected with pinworms, she should seek immediate medical counsel. As pinworms are a fairly common parasite, we would not put it past a GP or doctor to be able to identify and treat this, but given that doctors generally do not receive training within the field of parasitic infestations, our reader may still want to go the safe route of consulting a parasite specialist instead. A reader of ours has recommended Dr. Vipul Savaliya, founder of Infectious Disease Care (“IDCare”), and he has agreed to provide consultation with anyone who thinks they are experiencing parasite-related symptoms. His practice is in North Carolina, but our reader needs not be there to book a consultation with him. She can simply reach him and his office through his website at idcarepa.com. Alternatively, she could find her own specialist by Googling ‘infectious disease physician (name of her closest big city)’ or ‘travel disease doctor (name of her closest big city)’.

Now, regarding the white worm that is supposedly eating not only through wood, but porcelain and ceramic, we have no idea what this may be. There are plenty of white worm-like pests that eat through just wood, including the larvae of powderpost beetles, termites and wood-boring beetles. However, none of these really resemble the worm in the photo, nor do they eat ceramic and porcelain. Regardless, if our reader is experiencing an infestation of worms that are eating through her furniture, and potentially through the walls and foundations of her home, she needs to contact a professional to handle that. Treating worms that could potentially be all over the home by oneself is virtually impossible.

To conclude, it is unclear what the worm our reader found is, but it is clearly not a pinworm (if we assume that the eggs are from the worm). Now, although we have not heard of any worms that eat porcelain or ceramic, we do not know everything! Therefore, if any of our other readers know any worm-like organism of that sort, please feel free to leave a comment in the comments section below.

Article Name
White Worm-like Creature That Eats Through Wood, Porcelain and Ceramic is a Mystery
Description
"There appears to be a worm on the floor along with white dots that are eggs I guess," states this reader, who thinks she may have found pinworms in her home. The worms in question appear to be white in color, with a flat body.
Author
Worm Researcher Anton
Share the knowledge

1 thought on “White Worm-like Creature That Eats Through Wood, Porcelain and Ceramic is a Mystery”

This many people searched for this info: 2,195