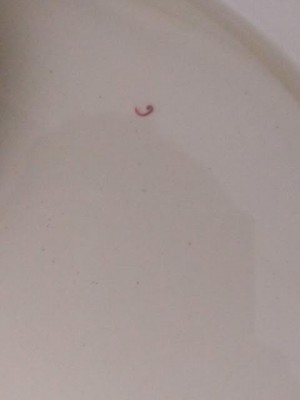 Worm in Toilet Could be Bloodworm

A reader reached out to us about a small worm he discovered in his toilet. He explained that he found the worm on multiple occasions, but he doesn’t know if it is the same worm every time, or a different worm that just looks the same. He has never noticed more than one at a time on any single occasion. He wants to know if this worm is a parasite from his stomach or something else. The picture he sent shows a tiny red worm-like organism: 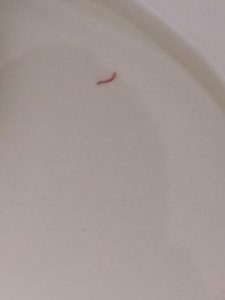 There are two red worms that readers discover in their toilets on a fairly regular basis. These two worms are bloodworms (which are actually midge fly larvae) and earthworms. We are confident that our reader has discovered one of these creatures, not a parasite from his stomach.

Bloodworms and earthworms are both red colored worms that need moisture to survive. While both have been found in toilets before, we think that the worm this reader is dealing with is a bloodworm, not an earthworm. This idea is primarily based on the size of the worm. Earthworms tend to be longer and thicker than bloodworms, and the worm in the photograph looks tiny.

So, what is a bloodworm doing in our reader’s toilet? Bloodworms feed on organic matter, so we think this bloodworm is probably eating whatever grime has built up in the toilet bowl and drain. We believe that if our reader cleans his toilet thoroughly, he won’t find anymore of these red specimens. Also, our reader might be comforted to learn that bloodworms aren’t known to transmit any human diseases.

To wrap up, one of our readers discovered a bright red worm in his toilet. We believe the worm is a bloodworm! We are confident that the worm is not a parasitic creature, but if he is worried about his health, we encourage our reader to visit a doctor because we are not able to give medical advice.

Article Name
Worm in Toilet Could be Bloodworm
Description
One of our readers discovered a bright red worm in his toilet. We believe the worm is a bloodworm!
Author
Dori Franklin
Comments: 1 Posted by: Worm Researcher Dori Categories: Worms Found in the House