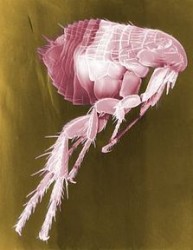 We received a question through the All About Worms Facebook page the other day about some tan larvae with brown stripes and legs that were found on a reader’s cat. (We write “tan larvae” to keep things simple, but the reader referred to them as “Beige/tannish,” so essentially the larvae are some sort of off-white color.) The larvae are quite small, about the size of an “I” on a keyboard, to use the reader’s helpful comparison. The reader said the larvae had legs “like a centipede,” by which she might mean the legs are clearly noticeable, and she also reports that the larvae jump. The reader was wondering if she had found found flea larvae, but worried she might have found something worse.

Unfortunately, the reader was unable to send any photo of the creature she found, so we are working without any sort of visual evidence, and this of course decreases the likelihood of a definitive identification. However, the reader did provide lots of helpful details, so we aren’t totally in the dark either. Based on everything we know, we think it is reasonably likely she did in fact find flea larvae – perhaps cat flea larvae (Ctenocephalides felis), the most common type of fleas people find on pets. (Despite the name, they afflict animals besides cats, including dogs and some wildlife.)

We think our reader found flea larvae because essentially everything she says is consistent with this suggestion. We briefly considered other possibilities, including carpet beetle larvae and (for obvious reasons) centipedes, and while these are possibilities if the “flea larvae” hypothesis should prove incorrect, we still think it is more likely she found flea larvae given the circumstances. (These other two creatures aren’t cat pests – their presence on the cat would be incidental.) Flea larvae are quite small, about the size of an “I” on a keyboard, and they are an off-white color. They don’t really have brown stripes, but the interior of their bodies can be a dark brown or black color, which is relatively common among larvae. (“White” larvae are often more like transparent larvae, and their darkened internal body cavities can be visible through their skin.) And perhaps most importantly of all, the larvae were found on our reader’s cat, so there are many reasons for suspecting she found flea larvae.

There are also reasons for suspecting she found regular fleas and not their larval form, or perhaps she found a combination of fleas and larvae. Indeed, her finding regular fleas would better explain at least a few of her observations. For one, fleas can have brown stripes because of the coloring of their body segments, which as we saw isn’t really the case with flea larvae. (On the other hand, fleas aren’t an off-white color – they are generally just brown – so, again, it is possible our reader found both flea larvae and their adult form.) Also, flea larvae are legless, whereas the adult forms, being insect, have six legs that are clearly noticeable and therefore might be described as centipede-like. (Flea larvae can have small hairs spread along their body, so they can kind of look like centipedes too.) Furthermore, fleas are capable of jumping, but the larval form cannot, so if she saw the creature on her cat jump, it is an adult flea. Finally, one generally finds adult fleas on a pet’s body, where it is feeding on the host’s blood, and whatever our reader found was directly on her pet. (A larvae could be on a pet, but they are more commonly found in the animal’s bedding.)

Regardless of whether our reader found flea larvae, adult fleas, or both, she wants to get rid of them, and fortunately there are effective treatments for fleas. Although a full treatment of the subject lies outside the scope of identification, we can say that getting rid of fleas is largely a matter of cleaning and sanitation. Pet bedding in particular needs to be cleaned often, and carpet that the pets spend time on must be vacuumed consistently and thoroughly. Pets themselves also need to be cleaned regularly. They must be bathed with soapy water, which can kill many of the fleas on their bodies. Pets also need to be combed, as the brush used can remove fleas from a pet’s coat. Just make sure to clean the comb as you brush (with soap or some other sort of disinfectant) so that you kill the fleas you are removing. The extension program of Texas A&M’s Department of Entomology has produced an overview of fleas and flea treatment, and it is one of the best and most thorough treatments of the subject we have read. Those who really want to know all about fleas and flea removal can consult this document.

Overall, it didn’t sound like our reader was dealing with any sort of serious infestation, so hopefully some good cleaning will take care of the problem. As always, though, we want to caution that our identifications are speculative, and also emphasize that we are not veterinarians. So, we aren’t certain our reader found fleas or flea larvae, and if our reader is concerned about the health of her cat, only a veterinarian can provide authoritative help.

Article Name
AAW - Tan Bugs with Brown Stripes and Legs - Fleas or Flea Larvae?
Description
The reader was wondering if she had found found flea larvae, but worried she might have found something worse.
Author
All About Worms
Comments: 0 Posted by: Worm Researcher Evan Categories: Pest Worms