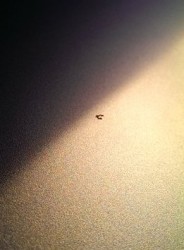 We received an interesting and highly detailed question from a reader recently who found a few tiny larvae in his room. The reader first noticed the larvae when they were lowering themselves onto his bed using a thread attached to the ceiling. The reader found several larvae, and traced their place of origin to a place in the ceiling, which is where the threads were attached. The reader thought he might have found moth fly larvae, but we actually think he found some sort of inchworm for reasons we will now outline.

The reader sent in a few good photos, but the larvae he found are so tiny that they are difficult to see in every photo. Because of the lighting, the larvae is easiest to see in the following image, which is actually kind of beautiful in its own way:

Essentially everything the reader says about what he found suggests he found some sort of inchworm, a creature we have written about a number of times. Indeed, we have written about inchworms hanging from threads in the kitchen, and we have written about an inchworm gathering in the laundry room. We have also written about inchworms on threads outside, which is where most inchworms are observed. (If people know of inchworms at all, they know them as tree pests – species like fall and spring cankerworms are common in North America and often seen feeding on deciduous trees and shrubs, which can damage the plant’s health.) So, we have some experience dealing with inchworms, and we think this is what the reader found. Not only are these larvae capable of rappelling by thread, as the reader observed, but they can also be quite small, and the creatures above are certainly small. The picture also shows a larva in the middle of its characteristic inchworm gait, described in detail in an article about red inchworms. (Essentially, they “inch” along.)

We should note that inchworms are not actually worms, but the larval form of geometer moths. Thus, when the reader speculated that he found moth fly larvae (and, as a side note, he had good reasons for doing so), he was on the right track because he did in fact find a larva – the larval form of a moth, also known as a caterpillar. (Caterpillars are just the larval form of moths and butterflies.) The reader did mention that he thought he saw moth flies around his room, but perhaps these were actually geometer moths. There are tens of thousands of different species, so they come in a variety of shapes and sizes, and some may look like moth flies. (We know that several geometer moths are grey and somewhat small, for example, and these might be mistaken for moth flies.)

Overall, we think there is a good chance our reader found inchworms. The circumstances imply as much, and the picture above appears to be of an inchworm.

Article Name
Tiny Larvae Hanging From Thread on Bedroom Ceiling
Description
We received an interesting and highly detailed question from a reader recently who found a few tiny larvae in his room.
Author
All About Worms
Comments: 4 Posted by: Worm Researcher Evan Categories: Pest Worms