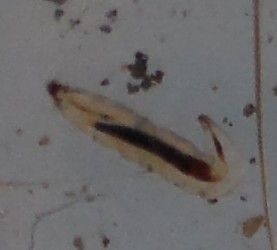 A reader wrote to us the other day about some small white larvae she found all over a towel on the floor of her home. Apart from being quite small – they are about a half centimeter in length at most – they also have a black interior, almost as if a black larva lived within the white larva. The larvae are therefore almost clear – they are see-through in the way that a light-colored mound of Jell-O might be. The reader is wondering what these creatures are and is concerned about their presence, primarily because she has small children in the house. So, what are the small, white larvae (or clear larvae) with the black insides that our reader recently found?

Helpfully, the reader sent us several excellent pictures of the creatures she is finding. The first image is an extreme close-up of one of the larvae:

The second picture, clearly taken further away, shows two creatures, both of which are right by a ruler for scale: 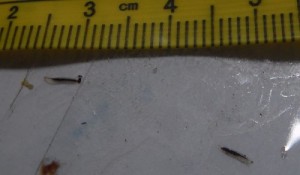 The reader sent additional pictures that were also great, but they showed the same thing – a tiny larva no more than a half a centimeter in length – so we didn’t include them.

Despite the essentially perfect pictures our reader sent in, we aren’t entirely sure what she found. The reader speculated that she found some sort of worm, but allowed for the possibility that they might be larvae instead. They are indeed larvae – on this matter we are confident – so we can at least clear up that confusion. What kind of larva was found, however, is a much more complicated question to answer given the staggeringly large number of species that go through a larval stage of development. It looks to us to be the larval form of some sort of fly, which could make it a maggot if the fly belongs to the Brachycera suborder (like houseflies), or something like a moth fly larvae, a creature we write about all the time. Although the two look very similar, it doesn’t quite look like a moth fly larvae, which overall tend to be darker (in contrast to the whitish, clear larvae pictured above). Generally the insides of maggots (their intestine and other internal body cavities) are not so easily seen from the outside, which is to say their bodies generally aren’t fully transparent, but this isn’t the case with all maggots. If you have the misfortune of looking at pictures of maggots on human wounds, you’ll often see that the interior of their bodies is red from the blood they consume.

Regardless of the exact type of larva our reader found, they are to be taken care of, as our reader surely agrees. While a few maggots, for instance, very likely wouldn’t harm any humans, they should still be eliminated from your home because they are unsanitary and can cause health problems (e.g., myiasis, a common parasitic infection in the livestock industry, but also one that can afflict humans). To get rid of larvae, the basic goal is to remove the conditions that gave rise to the problem in the first place. If an area of the house is moist and has a potential food source, this area needs to be dried and cleaned. The entire generation of larvae needs to be eliminated or they will perpetuate themselves.

Unfortunately, we weren’t able to precisely identify what our reader found, but it is definitely a larva, probably of some sort of common insect (e.g., a fly). No matter what they are, they should be removed from the house, although we don’t think they present any sort of serious threat to the health of our reader’s children. As long as the problem hasn’t gotten totally out of hand, thoroughly cleaning the area where the larvae were found will probably take care of the issue. We wish our reader the best of luck.