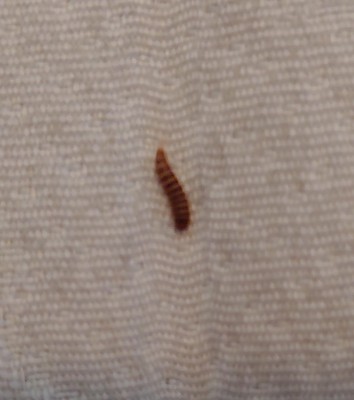 “I have found three, tiny, fuzzy, worm-like creatures,” begins this reader in her submission. She states that they look like carpet beetle larvae, and that they have been found in her bathroom by the baseboard. She asks that we tell her what they are and if she should be worried. 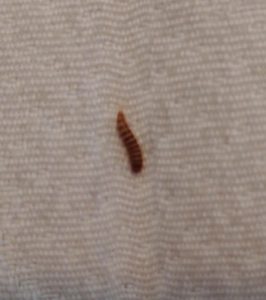 No pictures of her own are attached to her submission, but our reader did leave in a screenshot of the image above, which is from a past article of ours on the carpet beetle larva. So far, she has found one six months ago, and three at the time she sent in her submission. She explains that the reason for her not sending in any pictures is because she was so freaked out when she found the creatures that “the intense, knee jerk reaction got the best of” her, so she killed the poor things “instantly.” Our reader hates bugs and is based in Canada.

Now, if the creatures looked like the one in the picture above, then we would agree that they are carpet beetle larvae. While these pests are typically found in closets, bedrooms, and other places where there is an abundance of organic-based textiles, it is not unheard of to find them in one’s bathroom. After all, they will feed on cotton-based materials, which towels are often made of. Likewise, if it is the larva of the black carpet beetle (which is a particular species of carpet beetle larva), then it will also eat synthetic materials like polyester and vinyl.

Our reader does not need to be worried for her health, but carpet beetle larvae can be very destructive to the materials they feed on, so she should be worried for the items in her home that are prone to carpet beetle infestations. Such items include things made from (or including): cotton, wool, leather, silk, feathers, and any other organic/animal-based material. We are not saying that our reader is experiencing an infestation, but if she starts to think that she is, then she should take steps to control and ultimately eliminate the infestation. To do so, our reader should vacuum her home several times a week for two weeks, especially in areas where their numbers are more concentrated. She should also launder any infested clothes at the highest temperature they can muster, and steam-clean any upholstery or carpets if possible. More information on preventative measures can be found in the aforementioned article linked above.

To conclude, our reader seems to have found a carpet beetle larva in her bathroom. Of course, without a picture we cannot say this with 100% certainty, but this is assuming that it did indeed look like the larva in the reference photo our reader provided. We hope we answered her questions to a satisfactory degree, and we wish her the very best!

Article Name
Tiny, Fuzzy Creatures Found in Bathroom are Carpet Beetle Larvae
Description
"I have found three, tiny, fuzzy, worm-like creatures," begins this reader in her submission. She states that they look like carpet beetle larvae, and that they have been found in her bathroom by the baseboard. She asks that we tell her what they are and if she should be worried.
Author
Worm Researcher Anton
Share the knowledge

This many people searched for this info: 1,416