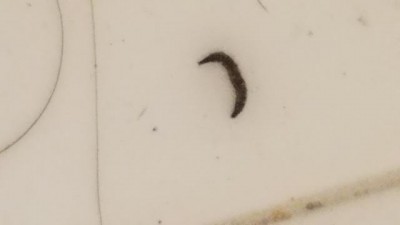 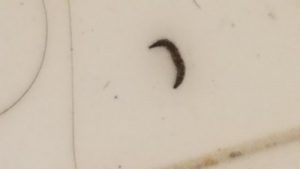 Although our reader did not send in any photographs to go along with her query, it is clear to us that she is experiencing an infestation of drain fly larvae. Drain flies, otherwise known as moth flies, are gnats that commonly infest the drains and pipelines underneath people’s homes. Usually they are found crawling up the walls one’s bathtub, or spying from the ceiling where they try to avoid conflict. Drain flies only develop in still-standing water, meaning that an actively used bathroom (although they can naturally also appear in other rooms with drains such as kitchens and laundry rooms) is unlikely to experience a drain fly infestation. One is more likely to discover drain fly larvae in their home after coming home from vacation or any extensive time away from home. As a result, drain fly infestations are normally short-lived as once the bathroom becomes active again, the films on which they lay their eggs are washed away.

That being said, more permanent infestations can occur, which are usually indicated by an infestation that has lasted for several weeks. Either way, there are simple steps one can take in order to clean out the ‘nests’ of drain fly larvae, as well as prevent future infestations. Cleaning out one’s drains with bleach and hot water is an obvious but effective way of preventing insects and other creepy crawlies from being attracted to one’s drain. This is because a lot of the worms and insects that commonly crawl up people’s drains do so because there is decaying organic matter that they wish to feed on. When it comes to drain fly larvae specifically, one will want to pay attention to wiping any build-ups of organic matter in the form of films, as this is typically where drain flies congregate and lay their eggs. In terms of the adult flies, their lifespans are not long anyway, so trying to eradicate them should not necessarily be a priority. What one wants to prioritize is making sure that they have nowhere to lay their eggs, thus consistently cleaning out one’s drains until the infestation has died down. One last measure one can take is, of course, ensuring that one’s window screens are intact and that doors are not left open for too long, as many insects can enter the home that way as well. Despite drain flies’ wings not being strong enough to sustain flight for long periods of time, they are able to enter the home via flight as well.

In conclusion, the black worms our reader has been finding in her bathroom are drain fly larvae. Fortunately, these infestations are usually temporary, and we are confident that if our reader does apply the methods suggested, she may stop this infestation before it becomes chronic.

Article Name
Little Black Live Worms in Shower are Drain Fly Larvae
Description
Little live black worms have been appearing in this reader's shower, who has "cleaned & cleaned & cleaned" in an attempt to get rid of them, to no avail. She wonders if we can tell her what the worms are and how to get rid of them.
Author
Worm Researcher Anton
Comments: 0 Posted by: All About Worms Categories: Drain Fly Larvae, Worms Found in the House, Worms Generally