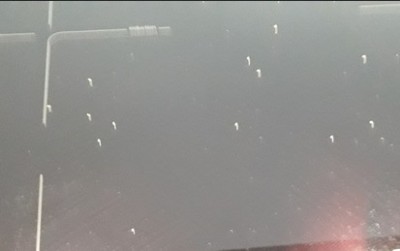 These tiny white larvae were found in this man’s kitchen in Portugal. After having moved into his new home in August, this reader has been spotting these larvae for several days in a row, and hopes that we can tell him what kind of larvae these are, and how they breed. 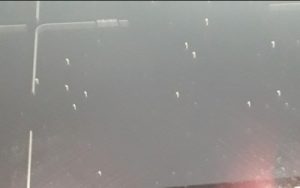 In addition to the photograph and the video (see video below), our reader provided a great deal of context, which we are thankful for. Along with their minuscule size and white color, our reader claims that the larvae appear to have a brown tip. Furthermore, he first discovered the larvae infesting a peach on his kitchen counter, at which point he also noticed a cluster on his kitchen floor. After killing the larvae (which we do not recommend doing), it took only a few days before he noticed the same larvae on his stove top. Upon repeating the same process, he would find more larvae there the next day, and then the next, and so on. He thinks that the larvae are coming from the “groove” in between the kitchen counter and the stove.

First and foremost, let’s answer our reader’s first question. What kind of larvae are these? These are the larvae of the Indianmeal moth. This is one of the most common pests one can find in their kitchen, as this larva feeds on various food in the kitchen, such as various grains, spices, and fruits. Secondly, in terms of our reader’s second question concerning breeding, the Indianmeal moth will lay either one, or several eggs at a time, usually “directly on the larval food source”, says the Entomology & Nematology Department at the University of Florida.

Given these two facts, it is likely that an Indianmeal moth laid her eggs in that groove, and if it is to be assumed that there is a tiny piece of food stuck there as well where the eggs were laid, then it would be a good idea for our reader to clean this groove out as best he can. Additionally, it is important that our reader immediately throws out any infested food, and does not keep it in his home, because otherwise the infestation could spread further. If our reader wishes to know more about the prevention and management of Indianmeal moth infestations, the resource linked to before has an excellent section on the various methods of handling these pests.

To conclude, the white larvae our reader found roaming his kitchen are Indianmeal moth larvae. Although these pests are common, they are still not a welcome guest, and can be quite the nuisance. We hope that our reader found this article helpful, and that his kitchen may be rid of these critters as soon as possible.

Article Name
Indianmeal Moth Larvae Infest thi's Man's Kitchen in Portugal
Description
These tiny white larvae were found in this man's kitchen in Portugal. After having moved into his new home in August, this reader has been spotting these larvae for several days in a row, and hopes that we can tell him what kind of larvae these are, and how they breed.
Author
Worm Researcher Anton
Comments: 2 Posted by: All About Worms Categories: Indian Meal Moth Larvae, Pest Worms, Worms Found in the House