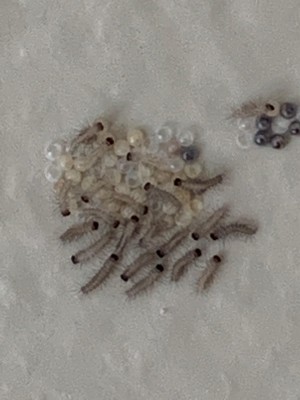 Patches of tiny, clear worms with black heads were discovered in this woman’s New Hampshire home. She is grossed out by the worms and asks for our help. 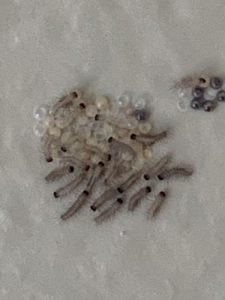 In the words of our reader, she initially thought the worms to be small ants when she found the first patch of worms on her ceiling, but realized they were something else when cleaning the area. Later on, she found another patch on her wall the next morning. She states that the patches are about a half inch in diameter, and that her photos show the eggs and larvae really well, which she is definitely correct in saying. We commend and thank our reader for providing such detailed images of these worms. She is also correct in assuming that these worms are larvae.

Upon doing a basic Google search of “small, clear larvae with black heads”, one will find hundreds of similar, if not identical, looking larvae. In fact, our reader tried herself to do the research and identify the larvae. She ruled out pantry moths (Indianmeal moths) as she found no webbing, and she also did not think they were clothes moths, but we think she was on the right track by researching moth caterpillars. Our reader got no further with her research, as she took to contacting us to help her identify the larvae, so as to prevent a potentially imminent infestation. The problem with larvae as tiny as these is that they are clearly underdeveloped. We might even assume that they were newly hatched, and the eggs in the photograph are the ones they hatched out of. At this stage, these creatures resemble the newly hatched larvae of countless caterpillars, from the owl moth, to the Indianmeal moth. However, what gave away this caterpillar’s identity was a last bit of vital information provided to us by the reader, that occasionally, big white moths would get into her house from outside.

And so, our search for the mystery larva was narrowed down significantly, and through perusing the lists of moths and butterflies that InsectIdentification.org lists specifically for New Hampshire, we stumbled upon the American Ermine moth, otherwise known as the ‘white ermine moth’. We think that it is the larvae of this moth that our reader found.

The American Ermine moth is common in the UK and North America, and can be found inside the home as they are drawn to light, much like most moths. Their diet consists mostly of strawberry bushes and other woodland vegetation, so our reader need not be concerned about this moth eating her food or clothes. However, as this moth appears to have laid eggs in her house, an infestation is possible, despite these larvae not being pests. The larvae look exactly like they do in the photograph provided when newly hatched, but once fully grown, these caterpillars come in a variety of colors: red, orange, brown, black, and greyish white. Additionally, the American Ermine moth larva also has bristles, making this caterpillar appear ‘hairy’ from a distance. In fact, if one looks closely enough at the photo our reader sent in, one can make out the bristles along the bodies of the tiny larvae. We encourage our reader to check out Wildlife Insight for excellent quality images of this moth in all its stages.

Moreover, Our reader stated in her query that her home is kept clean and dry, and that while she keeps wool and textile crafts in her house, they did not resemble clothes moths. It is excellent that our reader is keeping her house in good condition, as this prevents infestations of all kinds of insects and creatures to a large extent. In this case, it seems as though an American Ermine moth may have simply wandered or flown in, either through an open window or door, being attracted to the light, and laid its eggs in her house. Unfortunately, no amount of cleaning can prevent this from occurring.

Furthermore, as American Ermine moth larvae pupate during the winter, it would make sense that a mother moth would consider the stable conditions of the indoors as a prime spot to lay her eggs. To this moth’s disadvantage, she did not think as far ahead as putting her larvae near a food source, so the chance of survival for these caterpillars is limited. For this reason, simply removing the larvae from her home should successfully provide our reader with an infestation-free home. But she should still be on the lookout for more clusters of eggs! In order to prevent more chance egg-laying from moths and other critters in the future, we recommend our reader checks to make sure all cracks in the home are sealed, as well as that all her window screens are in prime condition.

In conclusion, the patches of larvae and eggs our reader found on the walls and ceilings of her New Hampshire home were those of the American Ermine moth (AKA the White Ermine moth). They are neither pests, nor harmful towards humans or pets, so our reader need not worry about their presence.

Article Name
Patches of Worms found in New Hampshire House are American Ermine Moth Larvae
Description
Patches of tiny, clear worms with black heads were discovered in this woman's New Hampshire home. She is grossed out by the worms and asks for our help.
Author
Worm Researcher Anton
Comments: 0 Posted by: All About Worms Categories: Worms Facts, Worms Found in the House, Worms Generally