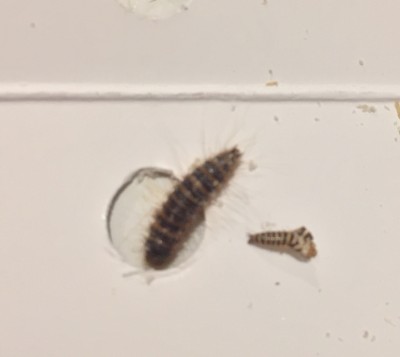 “I found these in a bag of dehydrated chicken” states this reader, kicking off his query with a rather odd, but intriguing scenario. By “these”, our reader is referring to brown and black-striped worm-like creatures with long bristles extending out from their bodies, all of which vary in size. 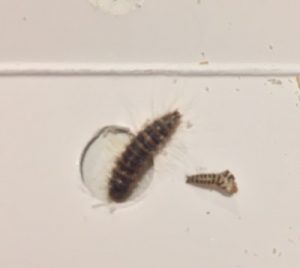 Our reader states that he thinks the worms are “some kind of beetle” and wonders if he is right in that assumption. He also asks where they might be coming from. If our reader means that these are the larvae of some type of beetle, then he is absolutely correct, as these are clearly carpet beetle larvae, a subject we have written about on numerous occasions. In terms of where they come from, carpet beetles and their offspring can come from all sorts of places. They can come in through an open door, a tear in a window screen (the adult beetle can fly!), through cracks in the walls, and apparently can even be brought into the home in bags of dehydrated chicken (though this is a new one for us).

Of course, we do not know that these larvae did come in on the dehydrated chicken, as our reader did not specify whether he thought the larvae were already present in the bag upon purchase, or if they made their way into the bag after it was brought into his home. We must say that it would be very strange for carpet beetle larvae to have gone into the bag willingly, as there is virtually nothing in there (that we can think of) that would attract such a creature. The diet of the carpet beetle larva consists primarily of animal based-textiles and hair/fur-like materials, but never meat. They will eat clothing, feathers, bed sheets, fur and hair, but will not eat any tissue of any kind. But with that in mind, if we assume that the carpet beetle larvae were already present in the bag, then that poses pretty much the same question, why were they there?

So, unfortunately, we cannot say for sure why or how these particular carpet beetle larvae came to be inside his bag of dehydrated chicken. Our best guess would be that one way or another, a cluster of carpet beetle eggs wound up with that chicken and they hatched inside the bag, thus spawning all of these larvae. Although it is quite a stretch, one could presume that the eggs were, in fact, laid in the bag on purpose, as carpet beetle mothers tend to lay their egg clusters in pieces of lint where the larvae will have instant access to a food source (so, whatever animal-based material the lint is made from), as well as the natural oils secreted through the animal’s skin. It could be that, while no food source was present in the bag (note that carpet beetle larvae can survive many weeks without food), the chicken’s natural oils attracted the mother beetle to lay her eggs there. Perhaps it was her last resort. Sadly, we will never know the whole story of the poor mother beetle whose children ended up in our reader’s bag of dehydrated chicken.

Our reader should not fret though, because as the larvae will have had virtually no interest in the chicken, they will not have eaten from it or contaminated it in any way, and so the chicken should be safe to eat. Carpet beetle larvae are merely damaging to the textiles within one’s home, but they do not pose any health threat to humans or pets. They do not bite or sting, and are neither parasitic nor carriers of any parasites or pathogens.

Lastly, we wish to make one point about the appearance of a couple of the larvae pictured in the photographs. We noticed that a few of the larvae had a very odd-looking head, where their bodies seemed to fan out, in a sense, creating a rather monstrous-looking bulb whose circumference is far larger than that of their bodies. It looks almost like carpet beetle larva has fused with a tarantula or something similar. Now, the interesting thing is that it was not long ago we received and wrote about a submission from a reader who found a carpet beetle larva with the same exact feature.

When we wrote that article, we had never seen anything like this, so we gave a few reasons for why the carpet beetle larva might have looked that way. We supposed that the larva may have been mangled in some way, that it had another larva in its mouth, or that it was in the middle of molting into another instar (the process by which larvae shed their skin and enter the next stage of physical maturity). Now, after having seen not one, but two more examples of this (in this case sampled from the same group of larvae), we are no longer convinced that this is a case of a mangled head or a larva having another in its mouth (for no apparent reason). We think it is more likely that this is what the larvae look like when they are molting and entering a new instar. 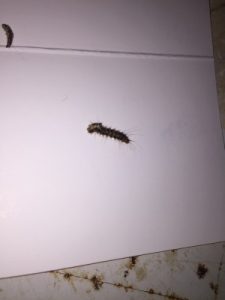 That being said, what has us questioning this conclusion is the fact that one of the larvae that looks like this in our reader’s photos is significantly smaller than the other larva next to it, which gives the impression that it is much younger than the other larva. This not only puts into question the idea that this is what a carpet beetle larva looks like when it is molting, but it also puts a substantial amount of doubt on our presumption that all of these larvae came from the same egg cluster. If the adult mother laid two clusters of eggs at various times, one would think the adult mother would still be in the bag too, given that she was there long enough to lay two separate egg clusters. Alternatively, some of the eggs could have hatched at different times, as they do have an approximately one-to-five week span in which they can hatch. Unfortunately, just like we will truly never know why or how the mother beetle’s eggs ended up in this bag of chicken, we may never know the real explanation behind the appearance of these carpet beetle larva anomalies.

In conclusion, the creatures our reader found in his bag of dehydrated chicken are carpet beetle larvae. They are not dangerous, but he definitely does not want them roaming his house and eating holes through all his textiles! Luckily, as they are all gathered in one spot, if he simply moves them outside, his home should be carpet beetle larvae-free. We apologize for the long-winded nature of this article, which posed more questions than it answered, but we hope that it nonetheless provided something useful to our reader. If any of our other readers have any answers to the plethora of questions and riddles brought up in the article, particularly in regard to the malformed carpet beetles, please feel free to share any ideas in the comment section below!

Article Name
Striped, Bristly Creatures in Bag of Dehydrated Chicken are Carpet Beetle Larvae
Description
"I found these in a bag of dehydrated chicken" states this reader, kicking off his query with a rather odd, but intriguing scenario. By "these", our reader is referring to brown and black-striped worm-like creatures with long bristles extending out from their bodies, all of which vary in size.
Author
Worm Researcher Anton
Share the knowledge