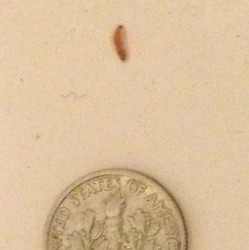 Tiny Worms in the Shower and Sink

A reader recently sent us a question about the tiny worms she is finding in her bathroom – in her shower and sink, more precisely. She also found a single worm in her room. The worms are quite small (see the picture below), and the reader describes them as a “pinkish color,” although this is difficult to determine on the basis of the image we were sent. The reader was wondering what she found, so we’ll focus on the question of identification.

First, let’s take a look at the image the reader submitted:

We had to cut off some of the image for formatting reasons, but the coin in the image is a U.S. dime, and it still gives the picture some nice scale. A dime has a diameter of about 18 millimeters, so this little creature is perhaps 6-7 millimeters long. What could this be?

No matter what, this is almost certainly some kind of insect larvae, which means it technically isn’t a worm, but this alone is hardly helpful. However, it does mean that the reader might have an adult version of this insect in her bathroom or bedroom, and adults are often quite a bit easier to identify than larvae. So, our reader should keep an eye out for insects, especially winged insects of the Diptera order. Technically, all insects in this order are “flies,” but many of them go by different common names, like gnats.

We mention flies in particular because, one, their larval form are frequently found in houses and, two, it is possible our reader found moth fly larvae, which are among the most common creatures we write about (which means that people find them in their homes all the time). We think our reader might have found moth fly larvae primarily because she found some in the shower and sink, which is exactly where moth fly larvae are most often found. Indeed, moth flies are often called “drain flies” because they make such extensive use of drains in their life cycles. Moth fly larvae are quite at home in drains, at least if there is a source of decaying organic matter, and there very often are such accumulations in pipes. The larvae are often out of sight – in many cases, people only know they have them by seeing an adult moth fly – but if there are clogs in the drain, the population can grow, and then people are more likely to see the larvae. Generally, unclogging the drain, and remaining vigilant about cleaning your drains, will solve the problem.

We aren’t certain our reader found moth fly larvae, but since she found the creature above in the shower and sink, this seems like a reasonable suggestion. However, it is strange she found a larva in her bedroom, as the larvae generally spend their entire maturation period in the drains themselves. We therefore wonder if the larva in her bedroom is something different, or if it is somehow possible that it was transported from the bathroom. In any case, we hope the reader only has a few larvae on her hands, and if so cleaning the drains should quickly take care of the issue.

Article Name
Tiny Worms in the Shower and Sink
Description
A reader recently sent us a question about the tiny worms she is finding in her bathroom - in her shower and sink, more precisely.
Author
All About Cruises and More
Comments: 0 Posted by: Worm Researcher Evan Categories: Pest Worms