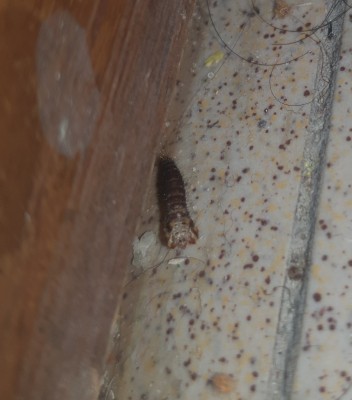 Bristled, Striped Creature May be Disfigured Carpet Beetle Larva, or Something Else Entirely

“Is it dangerous?” asks our reader, who sent in these photographs of a creature he found in his house which he is unable to identify. He wants to know if the presence of the creature will bring any harm, and how he may get rid of it. 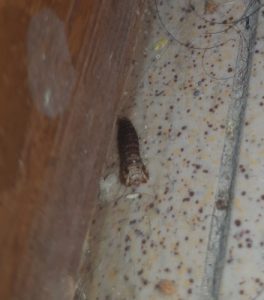 The creature in question appears to be dark brown and beige, the colors alternating with the stripes that encircle its entire body. It has short, spiky bristles that also run the length of its body. Given these qualities alone, we would have identified this as a carpet beetle larva. But then we come to the creature’s most ostentatious quality, the head (or tail?). What looks like a cross between the head of a tarantula and the demogorgon from Stranger Things (especially from the angle in the picture below) contrasts with the rest of its body and what we know about carpet beetle larvae. The more one zooms in on this part of the body, the more monstrous it gets. The four dots arranged in a square look like eye spots and the thorn-like appendages that surround them look like fangs, or pincers. Alternatively, it could be a larva eating another larva, the opening being the mouth of one larva, and what could be a segmented body of another larva sticking out of it. Either way, we have never seen anything like this.

So, what are the chances that this is just some mangled carpet beetle larva? Well, we would say about 50/50. On one hand, if one ignored the demonic head of the creature and focused only on its body, it does resemble a carpet beetle larva, from the brown stripes, to the bristles, to the shape of its body. Likewise, the location seems to indicate that there is a lot of hair or fur in this area, which would explain the presence of a carpet beetle larva, whose primary diet is animal-based matter, which can include hair/fur. On the other hand, we have no idea what a mangled carpet beetle larva looks like, especially if only one specific part of the carpet beetle was disfigured. Another possibility is that it is a carpet beetle larva that is about to enter a new instar (the next stage in larval development, where a larva sheds a layer of skin and changes its appearance). We could not find any other photographs of what this would look like, so we cannot confirm this either. 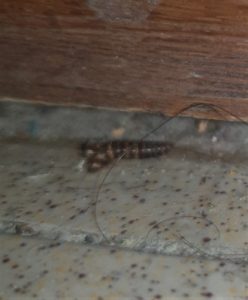 If it is a carpet beetle larva, then the way to get rid of it is to vacuum up the larva, as well as the area it was in. It is unclear if our reader is dealing with an infestation or not, both because our reader only found one of these critters and because, as we said, we are not sure if it even is a carpet beetle larva. If our reader does find more of these, that perhaps do not have this strange head, but resemble more closely a regular carpet beetle larva, he can consult any of our previous articles on carpet beetle larvae. Regardless, what our reader may want to do to ensure no more critters, such as this one, crawl into his space, is apply some preventative measures. This includes, but is not limited to, consistent housekeeping (vacuuming, laundering and sanitizing), replacing any torn window screens, sealing cracks in walling and flooring where possible, and inventorying unused garments that are either completely or partially animal-based.

To conclude, we are not sure if what our reader found was a moderately mangled carpet beetle larva or a creature from an alternate dimension, but we hope that this was a one-off discovery, and he does not find any more of these around his space. Either way, we are sure that if he gets rid of this creature and then applies the preventative measures listed above, he will not be seeing any strange creatures in the near future! And lastly, if any of our other readers have any ideas as to what this critter might be, please feel free to comment any suggestions below.

Article Name
Bristled, Striped Creature May be Disfigured Carpet Beetle Larva, or Something Else Entirely
Description
"Is it dangerous?" asks our reader, who sent in these photographs of a creature he found in his house which he is unable to identify. He wants to know if the presence of the creature will bring any harm, and how he may get rid of it.
Author
Worm Researcher Anton
Comments: 0 Posted by: All About Worms Categories: Carpet Beetle Larvae, Worms Found in the House, Worms Generally