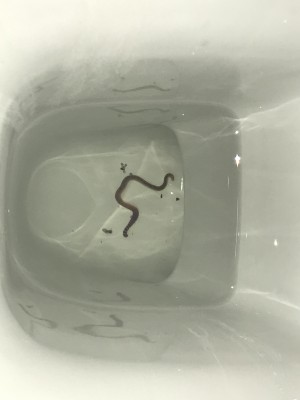 A black and white-striped worm of considerable length was found by this reader in his toilet in the morning. After finding our website, which “seem(s) to be an authority on worms!” (thank you very much), he hopes we can tell him if the worm is anything to worry about. 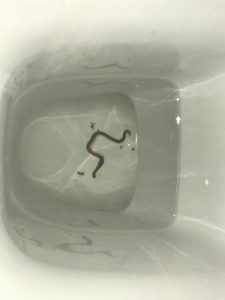 To be quite honest, we had trouble identifying this worm. It is not often a worm of this color and this length shows up in someone’s toilet. The closest thing we could find was the pheretima earthworm, which is an oriental species of giant earthworm. These worms are most commonly distributed throughout some of the East Asian archipelagos, and not so much throughout the Western world, but we are merely stating this as a preface to anyone else who may find this worm, as our reader may very well be located somewhere in East Asia, he did not specify.

Nonetheless, to answer our reader’s question, he does not have anything to worry about. Earthworms have been known to show up in people’s toilets in search of organic matter to feed on. Finding worms in one’s toilet can be a sign of poor maintenance, and to prevent more worms from showing up, we recommend that our reader develops a consistent cleaning routine of his toilet to avoid any build up of organic matter. In addition to this, pheretima earthworms are peaceful by nature, just like any old earthworm. They are not poisonous, nor are they parasitic. A note to any of our readers who find worms in their toilet: the only parasite of considerable length one can find in their toilet that would have come from their body is a tapeworm. And the physical appearance of the tapeworm is so characteristic, its flat, white body would rarely be mistaken for anything else. Now, back to the earthworm.

The only thing that has us questioning whether or not this really is a pheretima earthworm is the supposed lack of a clitellum (that band of thicker skin that usually wraps around an earthworm’s body). That said, the darker section of the worm (near the bottom of the worm) which is devoid of stripes could perhaps be the clitellum. It could likewise be a shadow, it is hard to tell. A fun fact about pheretima earthworms is that it has a use in Chinese medical practices. Certain biological agents that are naturally produced by the pheretima earthworm have been known to treat strokes in rats, as well as epilepsy in humans.

In conclusion, the worm our reader found in his toilet is a pheretima earthworm and is nothing to worry about. We hope that this article was able to put his mind at rest from any worries he had, and that he perhaps learned something interesting as well! As previously stated, we urge our reader to clean his toilet routinely so as to avoid any more unwanted guests finding their way up the toilet.

Article Name
Long, Dark and Striped Worm in Toilet is a Pheretima Earthworm
Description
A black and white-striped worm of considerable length was found by this reader in his toilet in the morning. After finding our website, which "seem(s) to be an authority on worms!" (thank you very much), he hopes we can tell him if the worm is anything to worry about.
Author
Worm Researcher Anton
Share the knowledge