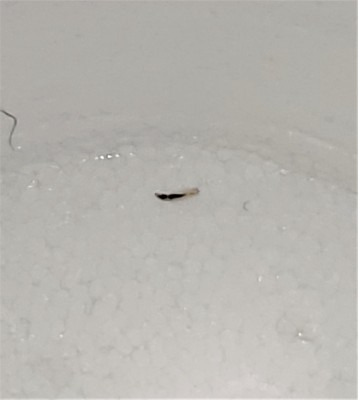 A “bunch” of this worm-like creature was found on this reader’s bed, who is scared as to what it may be. The creature in question appears to be almost completely transparent, with a black string of matter on its inside. 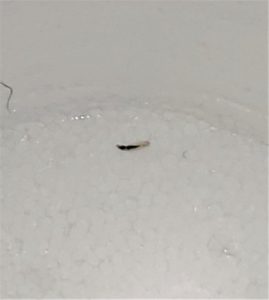 This short description alone tells us that this is a flea larva. Fleas are common external parasites that attach themselves to mammals (usually dogs and cats in urbanized areas, as that is the typical pet people own) to suck on their blood. Our reader mentioned that she has not been home but that she has an “animal” that sleeps in her bed. She did not specify which animal, but it nonetheless makes sense that a flea larva was found in this spot, as when one is experiencing an infestation (as our reader seems to be) they tend to be concentrated most in areas frequented by an animal.

Fleas of the common sort (dog and cat fleas) do not typically attach themselves to humans; the ones that do are quite rare and are more likely to be found out on farms as they also feed on pigs. For that reason, our reader probably does not need to worry for her own health (as fleas can be carriers of pathogens and disease). Of course, her animal is still plenty of cause for concern, and so we recommend that our reader take it to a vet as soon as possible to get it treated.

In terms of what our reader should do to eradicate the flea infestation, there are few things to do to ensure their removal. The first step is usually to locate a source (where the fleas are most highly concentrated and where they lay their eggs), but our reader seems already to have done this. The bed on which the animal sleeps would logically be the source of the infestation, seeing as our reader has found “a bunch” of them there and that is where the animal spends a lot of its time. So, secondly, our reader is going to want to launder the sheets, comforters, and any materials (where possible) that have been on and around the bed at the highest temperature they can withstand. Additionally, if there are other places our reader’s animal tends to sit or lie down, launder/steam-clean those areas too (depending on if the material can be taken off the furniture). The last thing our reader wants is to remove the fleas in one location, and get her animal treated, only to then have her animal infested again in a different spot.

If our reader’s home is carpeted, we also recommend at least vacuuming the entire home (and steam-cleaning if possible), as she will want to rid her home of all the eggs, larvae and adult fleas that could potentially be scattered around the home. In order to prevent fleas from entering the home, we simply recommend that our reader checks her animal for fleas more often, and takes it to the vet as soon as they are discovered. This will minimize the risk of infesting the home if the fleas are treated immediately. Normally we also recommend sealing cracks in walling, flooring and window screens to prevent bugs from coming in, and while this is all around good advice for preventing infestations of multiple insect species, in this circumstance, we are guessing the animal might have been/often goes outside and brought in the fleas that way, and that cannot really be helped.

To conclude, the see-through worm-like creature our reader found on her bed is a flea larva. While the common flea is not directly harmful to humans, they can be to pets. We are sure that if our reader applies the methods of controlling and eradicating this flea infestation, she will be rid of them shortly and have a worry-free home. The best of luck to her!

Article Name
See-through Worms Found on Bed are Flea Larvae
Description
A "bunch" of this worm-like creature was found on this reader's bed, who is scared as to what it may be. The creature in question appears to be almost completely transparent, with a black string of matter on its inside.
Author
Worm Researcher Anton
Comments: 0 Posted by: All About Worms Categories: Dog Worms, Parasite Worms, Worms Facts