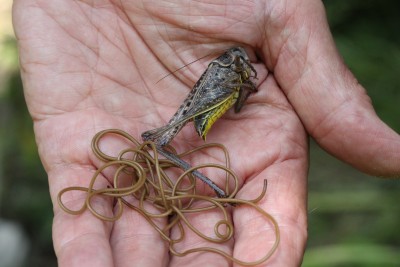 Horsehair Worms Come Through the Jets of a Whirlpool Tub

A woman discovered worms on her skin after using the whirlpool tub at a cabin rental. She describes the worms as being tiny, brown and ‘fishing line-like’.

Unfortunately, our reader was unable to provide pictures of the worms as she immediately scrubbed the worms off her body, but she did mention that she experienced no symptoms after this incident. Furthermore, she specified that the worms were discovered immediately upon turning on the jets of the hot tub. Regardless of the lack of visual information, we can quite confidently say that we think these are horsehair worms! Horsehair worms are marine worms that are exactly as our reader described, except they tend to be quite long for the most part. Of course, our reader did not specify if she meant ‘tiny’ in terms of the worms’ length or width.

Horsehair worms are commonly referred to as gordian worms for the their tendency to wriggle themselves into knots, this being a reference to the famous gordian knot, a tale from mythology. These creatures belong to the group Nematomorpha, and are usually found in bodies of water, be it puddles, streams, water troughs, or other exposed bodies of water. This would include man-made bodies of water, such as pools and hot tubs. Although these worms are parasitic to certain insects, and it is inside the bodies of their hosts that they mature, they are harmless to human beings, and our reader has nothing to fear. Additionally, they do not use pets as hosts, livestock, or any mammals whatsoever, so in the case that our reader has pets, she needs not worry about them either.

It is thus our opinion that the host with the mature larvae inside of it most likely got into the jet, and the worms burst out of it upon hatching and proceeded to come out of the jet at some point thereafter. Otherwise, when mature adults, horsehair worms do not tend to congregate together, but split up to each go find insects to host. Therefore, it will not be necessary for our reader to apply any measures for control, as horsehair worms are not pests, and do not infest bodies of water unless insects are present, and since the tub is obviously not our reader’s, she will not have to worry about this anyway.

To conclude, the worms our reader found in the whirlpool tub at her cabin rental were likely horsehair worms. These worms are completely harmless, and so our reader can rest assured that although her time in the tub may have been spoiled by the discovery of worms, she will be unaffected in the long run.

Article Name
Horsehair Worms Come Through the Jets of a Whirlpool Tub
Description
A woman discovered worms on her skin after using the whirlpool tub at a cabin rental. She describes the worms as being tiny, brown and 'fishing line-like'.
Author
Worm Researcher Anton
Comments: 1 Posted by: All About Worms Categories: Marine Worms, Parasite Worms, Worms Generally