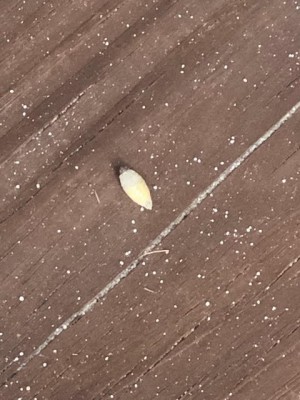 A plump, white worm-like creature with a black/brown head was found on this reader’s front porch and he wonders what it could be. The tiny specks around it are sand, as our reader recently moved their sandbox away from the area the creature was discovered in. 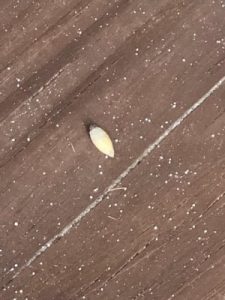 To get straight to the point, we think this is a root weevil larva. This is sheerly because of its appearance. It’s fat, white and bland body, paired with the tinier black or brown head gives this critter away. Root weevils are classed as beetles, but are their own entire category. There are over 97,000 species, in fact. The larvae of the root weevil develop on — you guessed it — the roots of a plant, where it feeds on said roots, causing harm to the plant. Infestations of root weevil larvae in gardens can potentially wreak significant destruction on one’s plants. While the larvae eat at the roots, the adult weevil (which resembles a matte black beetle) eats on the leaves of the plant. Thus, our reader could perhaps confirm the identity of this larva by checking nearby plants in his yard for weevils. However, root weevils are nocturnal (this is to avoid predators), so catching one in the act might prove a tad difficult. That being said, root weevils leave characteristically semi-circular chew marks on their leaves (see image below from Colorado State University), so they can be identified that way as well. 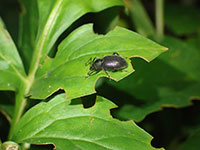 Root weevils have also been known to wander indoors, but will not feed on houseplants, and pose no threat to human or pet life, so our reader need not worry in that regard. They tend to live for up to a year, the larval stage lasting the longest. Eggs tend to be laid in late spring/early summer, and the larvae hatch mere days after, taking their places underground to begin feeding. Then they overwinter in the soil before beginning to pupate in late winter/early winter. Unlike a lot of beetle species, root weevils cannot fly, so if our reader spots a beetle that can fly, he knows it is not the weevil he is looking for. Another fun fact is that some species of root weevil are asexual and produce only females, meaning they require no male counterpart to fertlize their eggs. This is an incredibly valuable skill to have as it ensures the survival of the species. Of course, we cannot know if the larva our reader found is of such a species. Not only are the larvae so nondescript that one cannot tell their species at that stage, but additionally, no context as to the location of our reader was provided, so we would not even be able to narrow down the list of the potential species it could belong to.

Unfortunately, given the nature of how they feed (underground, that is) there are not any methods of getting rid of these creatures without the use of insecticides, and since we do not condone the use of such chemicals (because they can harm human, plant and animal health), there is not much advice we can give on that front. Some sources even advise introducing nematodes to one’s garden that will prey upon the root weevil larvae to eradicate them that way, but introducing invasive species into one’s garden can also have unpredictable side effects that we do not think would be worth it.

In conclusion, the creature our reader found on his front porch is a root weevil larva. We are not sure which species specifically, but our reader can rest assured that the little critter is not dangerous in any way. If any of our other readers have any ideas as to how one could control and eradicate root weevil larvae infestations (though we are not suggesting that our reader is definitely experiencing an infestation), please drop your suggestions in a comment below.

Article Name
Plump, White Worm-like Creature on Front Porch is a Root Weevil Larva
Description
A plump, white worm-like creature with a black/brown head was found on this reader's front porch and he wonders what it could be. The tiny specks around it are sand, as our reader recently moved their sandbox away from the area the creature was discovered in.
Author
Worm Researcher Anton
Share the knowledge