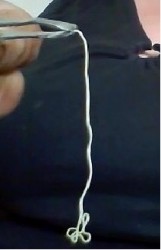 A reader of ours found a worm on the bathroom floor that he thought looked a lot like dental floss or thread. We do not have a picture of the worm, but there is a possibility that this worm is a horsehair worm.

Horsehair worms are found all over the world and they are generally found in, near, and around water. These worms need moisture in order to survive. They also need food and they are considered parasitic. While these worms do not actually kill their prey from the outside, they infest many types of insects such as crickets, cockroaches, beetles, and grasshoppers from the inside. 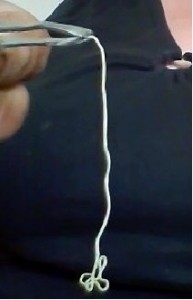 When insects have been infested with these worms, they may become very thirsty, as the horsehair worms will come out from inside the insect only near water.

There worms are in the Gordian family that was named after the knot that they form when they group together. When the worms get together, they resemble the Greek Gordian knot. There are over 300 species of horsehair worms in the world.

The full grown horsehair worms are very thin and long. They look very similar to a piece of floss or a piece of thread, much like our reader described. They are white, off-white, black, or brown in color and some people say that they have even seen some that look pink, which could depend on what shade of brown they are.

Our reader has possibly found a horsehair worm in their home. These worms are not parasitic to humans so they can rest assured knowing that much.

Article Name
Thread-like Worm on Bathroom Floor
Description
A reader of ours found a worm on the bathroom floor that he thought looked a lot like dental floss or thread.
Author
All About Worms
Comments: 0 Posted by: Previous Author Categories: Interesting Worms, Parasite Worms