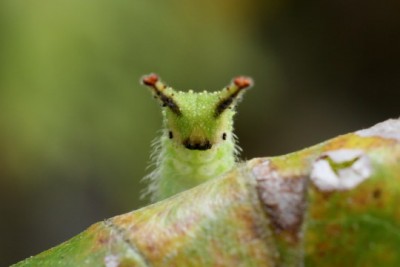 A certain, cute critter has recently taken the internet by storm with its ridiculously adorable appearance that has people all over the world going ‘awww’ at just the sight of it. This article is going to provide a brief introduction to the Japanese emperor butterfly caterpillar and explain what it is about the caterpillar that so many find appealing. 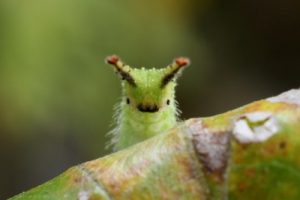 The Japanese emperor butterfly (Sasakia charonda) is Japan’s national butterfly, and is considered a national treasure. The male’s beautiful blue/purple and brown wings, adorned with stark, white spots make it a sight worth seeing, and there are even vast numbers of analyses conducted on the color pattern of the butterfly’s wings. However, while the male’s wings are bright blue and colorful the female’s wings are a uniform brown, with the same white spots.

The Japanese emperor butterfly is not to be confused with the purple emperor butterfly, although it often is. The purple emperor is similar in appearance, but its spots are less defined, and its wings are more blue and black than blue and brown; they are also found in England rather than in Japan. These butterflies are also not to be confused with the ‘regular’ emperor butterfly, which is actually not a butterfly at all, but a moth. This moth has soft-looking fur on its wings, and is various shades of brown, with grays and whites blended in and big black spots on its wings. Surprisingly, although there is a plethora of resources and information on the emperor moth, there is actually not much detailed information about the Japanese emperor moth, despite it being Japan’s national butterfly.

What we do know about the Japanese emperor moth is that while it is native to Japan, it has shown up in other countries and regions as well, such as China, Vietnam, Taiwan and the Korean Peninsula. These butterflies belong to the family of butterflies known is Nymphalidae, which is the largest class of butterflies, which includes over 6000 species! Butterflies that are part of this family are known for their bristly legs and tendency to stand on four legs instead of six, tucking two of them up against their bodies like flamingos.

Taking all of this into account, it it interesting that the caterpillar of this butterfly has become far more famous than its adult form. Its rather nondescript, green body with sparse pairs of triangular spikes sticking out of its back are not what has made this caterpillar an internet phenomenon, but rather its adorable face. With a pair of antler-like antennae/horns, wide-set, beady black eyes and smile-shaped mouth (which looks as if it has been drawn on), this caterpillar’s face looks almost cartoonish. Countless photos of this critter poking its head above a leaf to look at the photographer can be found across the web, and will make just about anyone sigh with delight at having seen this cute critter’s teeny weeny face. Unfortunately, even less is known about the Japanese emperor butterfly’s larval form, except for the fact that it feeds on hackberries, and so until an entomologist decides to study this particular species of butterfly and publish more information about it, all we can do is sit behind our screens and ‘aw’ at this adorable fellow.

In conclusion, this article has given a brief overview of the Japanese emperor butterfly, its appearance and kin, and an even briefer look at its younger form, the caterpillar, and how its charming face has spread like wildfire across the internet. We hope that this little guy’s face can bring a smile to our readers’ faces, and that the potential uncovering of the mysteries surrounding this butterfly can give our readers something to look forward to during these uncertain times.

Article Name
The Japanese Emperor Caterpillar and Why it has Taken the Internet by Storm
Description
A certain, cute critter has recently taken the internet by storm with its ridiculously adorable appearance that has people all over the world going 'awww' at just the sight of it. This article is going to provide a brief introduction to the Japanese emperor butterfly caterpillar and explain what it is about the caterpillar that so many find appealing.
Author
Worm Researcher Anton
Share the knowledge