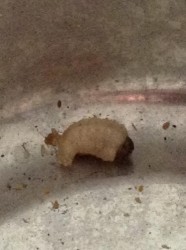 A reader of ours sent us a picture of what appears to be a white grub worm. He said it found it next to his dog’s food bowl and was curious if it was a worm or a larvae. After looking at the picture that he sent, we have determined that it is a grub worm which is not a worm at all. 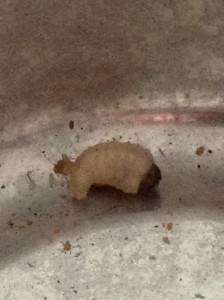 Grub worms are actually beetle larvae. There are quite a few different species so it is hard to determine exactly which one our reader has found. They are generally found in lawns and gardens of North America. Adult beetles do very little damage to plants and gardens, but in their grub form they can take out entire lawns and gardens.

Grubs feed on the roots and crowns of plants and can ruin gardens rather quickly. They are preyed on by other animals like skunks and raccoons. These animals can add to the destruction by digging up the soil to find the grub worms to eat. There are quite a few species of grubs and although some can be destructive, others can be beneficial.

Grubs like Nematodes help to control pests and insects in the soil of lawns and gardens. These grubs live in feces and compost which can help convert the cellulose in the soil into nutrients. These are the grubs that are great to have around!

Our reader did say that the grub was found inside and it is very strange to find them indoors. Weather and climate changes can drive the grubs to move indoors, so this could be how it got inside. Also, if the reader’s dog goes outside frequently, it could have gotten in somehow with the dog. Dogs will sometimes eat grubs so it could have brought it in that way as well.It could also be possible that the grub was in the dog’s food, so it is important to check the bag of food as well.

Article Name
Worms by Dog's Bowl Probably Grub Worms
Description
A reader of ours sent us a picture of what appears to be a white grub worm.
Author
All About Worms
Comments: 0 Posted by: Previous Author Categories: Grub Worms