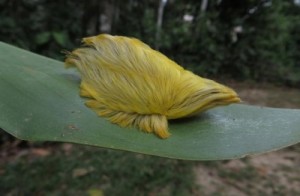 Donald Trump is famous, but his hair, such as it is, is even more famous. Everyone is familiar with, whether they want to be or not, that bizarre orange wave that sits atop Donald Trump’s head in the place that humans generally have hair. It is for this reason that when a photo of a rare flannel moth caterpillar, recently spotted in a rain forest in the Amazon, was posted online, most people had an immediate cultural reference point to describe what they were looking at: a miniature version of Donald Trump’s hair (or toupee or whatever that thing is). The flannel moth caterpillar looks so much like Donald Trump’s “hair” that people have taken to calling it the “Donald Trump caterpillar.” (If you are a scientist, however, you probably still refer to it as “Megalopyge opercularis.”)

Take a look at the photo that’s been floating around the internet since news broke of the Donald Trump caterpillar’s appearance:

As you can see, the caterpillar does indeed look like Trump’s hair. It’s more yellow than orange, which gives it a slightly different look, but overall the resemblance is unmistakable. The caterpillar’s hair even has a part in it, just like Trump. An additional parallel between the Trump’s hair and the caterpillar’s hair (or at least it’s a possible parallel) is that the caterpillar’s hair is not hair at all. Rather, the strands of “hair” are known as setae, which are bristles present on lots of worms and caterpillars, that help with defense and movement. In the case of the flannel moth caterpillar, the setae contain venom that can cause skin irritation. When readers send us questions, they often ask us if caterpillars are dangerous. Our basic answer is “no,” but we are sure to note that they can cause skin irritation if touched, and here we have an example of a caterpillar that causes precisely this type of reaction.

It is not without reason that the flannel moth caterpillar is called the “Donald Trump caterpillar,” but we can’t help but add that we feel a little bad for the caterpillar. These poor caterpillars – who among other things have never demanded that the president of the United States release his birth certificate – are just trying to protect themselves from predators with their setae, and now their defense mechanism forever links them with a man notorious for being as arrogant as he is rich.

This many people searched for this info: 1,615