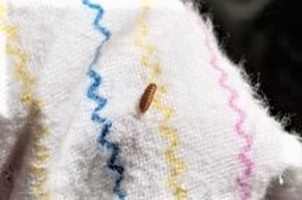 A father in Arizona found a “bug” in his daughter’s sheets, and wonders if we can identify it for him. The creature in question appears to be minuscule in size, ovate in shape, and striped in brown and tan colors.

Our reader states that he has never found anything like this before, and I’m sure that while he is concerned for the safety of his daughter, as finding any unwanted creature in one’s sheets is not a welcome sight, our reader can rest assured, for the bug he has found is the larva of a carpet beetle. While being considered pests, carpet beetles are harmless toward human beings. It was only by zooming in the photo that we were able to identify the creature’s characteristics and conclude that it was a carpet beetle larva (see cropped version of the image below).

Carpet beetles are common household pests, whose larvae feed off of various animal-based fabrics, including: blankets, carpets, upholstered furniture, and sheets. In addition to this, carpet beetle larvae may also feed on dead insects, lint, or pet food. As opposed to their larval form, the fully-matured carpet beetles feed on pollen and nectar, but can still invade homes in order to feed off of food inside the kitchen such as cereal, rice and flour. The larvae, like the one in the picture, tend to measure between 4-5mm, and be brown and tan in color (the colors alternating between the stripes). Most larvae also have coarse hairs that sprout from their bodies, but it is difficult to tell if this one does. We were only able to decipher its characteristics by zooming in very close on the photo, and when one does that, the finer details become blurry. Nonetheless, we are confident that this is a carpet beetle larva, given the location it was found, its coloration and striped pattern, and its shape and size.

In order to deal with a carpet beetle infestation, one must locate the source of them. Things that will give away an infestation are finding actual larvae or mature carpet beetles walking around, or finding shed skins. Looking for the eggs or pupae of carpet beetles is fruitless as they will be hidden away between the folds of whatever fabric they are residing in. Once the source is located, vacuuming up the organisms is the next step. Finally, washing all fabrics that could possibly be infested, and especially those that definitely are infested (such as our reader’s daughter’s sheet) will ensure the elimination of any remaining beetles, in particular any present eggs or pupae.

To conclude, the bug that our reader found in his daughter’s sheets was a carpet beetle larva. He needs not worry for his daughter, but these critters can be quite a nuisance as they chew quite noticeable holes through one’s fabrics! So, if he wishes to rid his home of these pests, we recommend following the advice detailed above.

Article Name
Bug Found on Daughter's Sheets is a Carpet Beetle Larva
Description
A father in Arizona found a "bug" in his daughter's sheets, and wonders if we can identify it for him. The creature in question appears to be minuscule in size, ovate in shape, and striped in brown and tan colors.
Author
Worm Researcher Anton
Share the knowledge

This many people searched for this info: 3,155