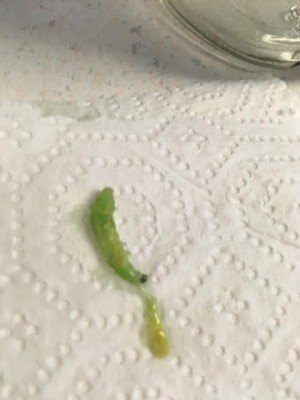 Green Worm Found on Broccoli is a Cabbage Worm

A green worm was found on this reader’s broccoli, and was unfortunately hurt when dropped onto the cutting board. Our saddened reader put the “poor little guy” outside in the shade, hoping that it would recover, and asks that we help her identify the critter. 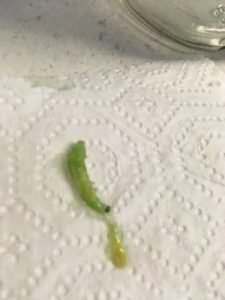 We thank our reader for providing such a clear quality image, as well as for taking such good care of the worm upon discovering its injury (which is apparent by the “goo” oozing from its body in the image above). It is not often we get inquiries from readers who treat the worms they find so tenderly, so we appreciate that. Our reader states that the broccoli the worm was found on was not organic, and hence whatever pesticides farmers may have used were clearly not effective. Contrarily, one might suggest the worm might not have traveled with the broccoli into our reader’s home, but made its way into her home some other way and then found the broccoli. Of course, we do not know if the worm was already on the broccoli prior to our reader taking the broccoli out of its packaging as she did not specify.

Nonetheless, we think this creature is some kind of caterpillar. One might be tempted to immediately assume this is a broccoli worm, which is a generic term used for cabbage loopers. However, cabbage loopers are more velvety in texture, and do not have black heads, but are a uniform, bright green. Given this worm’s green color, moderate transparency, and small, black head, we think this is something else. On the other hand, this worm could be some kind of ‘cabbage worm’, this being an umbrella term for various species of caterpillars that eat cabbage leaves, such as cabbage loopers, cabbage white butterfly larvae, and more. In addition to this, when researching cabbage worms, one can find information about so many different species of caterpillars. This makes identifying this critter very difficult.

Smooth, green caterpillars that eat leaves are just about the most generic type one can find, and are thus some of the most challenging to identify at their larval stage. Usually, one would have to wait until they are fully matured to identify their specific species, as they will have more distinct characteristics at that point. Thus, if our reader finds more of these, we recommend putting a couple of the larvae in a container with air holes and food to see what they develop into. Our best guess is that it is some kind of cabbage worm, given where it was found, and what it was presumably eating. However, it could be something else as well!

To conclude, the green worm our reader found on her broccoli was most likely a cabbage worm of some sorts. We applaud our reader for taking such good care of the little critter, and hope that our article helped to some degree, even if we were not able to provide a confident identification.

Article Name
Green Worm Found on Broccoli is a Cabbage Worm
Description
A green worm was found on this reader's broccoli, and was unfortunately hurt when dropped onto the cutting board. Our saddened reader put the "poor little guy" outside in the shade, hoping that it would recover, and asks that we help her identify the critter.
Author
Worm Researcher Anton
Comments: 0 Posted by: All About Worms Categories: Cabbage Worm, Caterpillars, Garden Worms