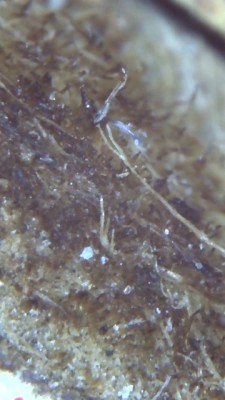 “It seems to contain worms” says this reader about the organisms she has been finding on her wood laminate floor in her bedroom. She hopes that we can identify the worms she has found, though every picture seems to display something different. 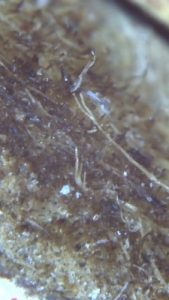 In addition to the photographs, our reader also gives us a fair amount of context, which is much appreciated. Our reader is based in Eugene, Oregon and suspects she has moisture issues in her home. The bedroom in which the worms were found is located directly above a crawl space. For the entirety of the rest of the lower level, the floors are bamboo wood. Meanwhile, due to the moisture problems, the laminate flooring “appears to be turning into what seems like particle board” and is “separating at the ‘seems’ even”. The pictures our reader has taken are through a microscope. 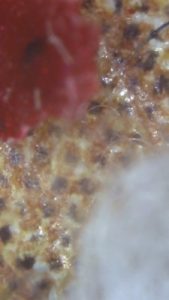 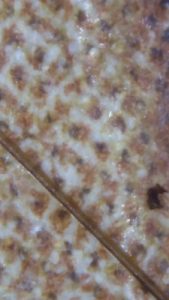 Unfortunately, because these worms are microscopic, we will not be able to identify them, as this is beyond our reach. If they are microscopic to begin with, they may not be worms, strictly speaking, depending on how far our reader had to zoom in to see them. In addition to this, every picture shows what looks to be a completely different-looking organism, so we are not even sure that they are all from the same species. With all of this in mind, our reader seems already to have identified the source of this problem, and perhaps the source of the worms, namely the moisture problem. What we advise is that our reader get this problem fixed, and as a result the worm problem may also be resolved. Hiring a professional to look at her plumbing is probably the best way to go about it, as there may be a water leak in one of the pipes running through her bedroom floor or walls that needs urgent fixing. If the worm problem still persists after the moisture problem has been dealt with, she may want to take samples of the worms to her local county extension office to have them identified by someone who has direct physical access to the organisms. 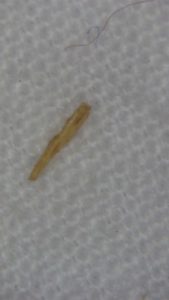 To conclude, we cannot say exactly what organisms our reader found on her bedroom floor; not only does each one look completely different, but they are microscopic too, which makes identifying them that much harder. Nonetheless, we hope that our reader is able to get the moisture problem fixed as soon as possible and we wish her the best of luck.

Article Name
Woman Finds Microscopic Worms on Wood Laminate Floor with Moisture Problems
Description
"It seems to contain worms" says this reader about the organisms she has been finding on her wood laminate floor in her bedroom. She hopes that we can identify the worms she has found, though every picture seems to display something different.
Author
Worm Researcher Anton
Share the knowledge