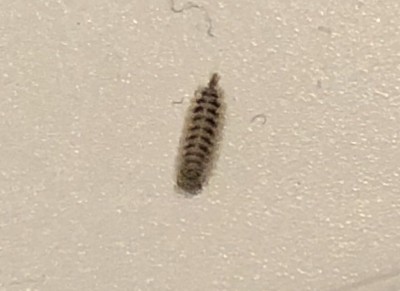 A woman in Poland is currently dealing with an infestation of hundreds of tiny worms inside her house. She says that six months prior to her contacting us she had an identical infestation, and that although pest control had taken care of them then, they are out again. According to our reader, the worms are only found sticking to the top parts of her ground-floor walls and ceilings, are 1-2mm long (0.04-0.08-inches), and appear to be black in color with a segmented outer gray layer. 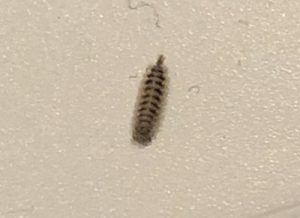 These worms are being found both inside and outside her house, and she hypothesizes that they creep out from the ceiling through the led lights which are installed all over the ground floor ceilings. Furthermore, she writes that the pictures display the “fully grown” form of this creature as she could not find anything that represented the next stage of these creatures. We do not think this is the case. In fact, the creature on the picture most resembles a carpet beetle larva. The reason she did not find any fully grown carpet beetles is most likely because they have either been inside her carpets or other furniture made out of fabric feeding (textiles being their primary food source), or hiding in some dark, secluded space in her house, as that is where one is most likely to find them nesting.

At first we thought it might be an isopod, a class of crustaceans that have segmented, hard shells, such as the woodlouse. This is supported by the fact that our reader supposed that the creatures were feeding on the wooden construction of the house, but upon closer inspection of the images, we realized that the segmented gray parts looked more like bristles than an exoskeleton, thus giving away that it was a carpet beetle larva. Furthermore, the gray marking on its head and small antennae further point toward this conclusion. Most carpet beetle larva are brown in color, but if you dig deep enough on the internet, you will find pictures of black and white ones that look identical to the one our reader sent in!

One of the pictures our reader sent in provides a clear comparison between the body of the larva and the reader’s finger, which correlates to the size one would expect of a carpet beetle larva (this one may be a tad undersized if it truly is 2mm or less). It is their size which makes carpet beetle infestations so aggravating. Usually, people will not know they are being infested with them until they notice holes in a bunch of their clothes and furniture! Even though having these creatures crawling up her walls is definitely not the ideal situation, it is lucky that she was able to spot them so quickly. 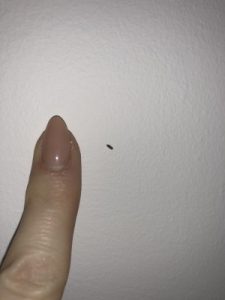 In addition to the pictures, which we appreciate for their excellent quality, our reader kindly sent in a video of the larva moving. We see it move smoothly across the surface at a rather slow pace. Many picture any kind of larva as a naked, legless creature which wriggles about helplessly, but carpet beetle larva are different. They have bristles along their body, as well as a set of six legs on their bottom which they use to walk and climb up surfaces.

We have to admit, crawling up the walls and ceilings is curious behavior for carpet beetle larvae, as they tend to stick to dark, cramped areas close to fabrics they can eat. A reasonable explanation for this behavior may be that they are nesting in a piece of tall furniture that reaches the ceiling, for example: wardrobes or cabinets. We recommend our reader tries to locate where these larvae are spawning. Looking in cupboards, underneath furniture, and behind furniture may reveal where the creatures are living. 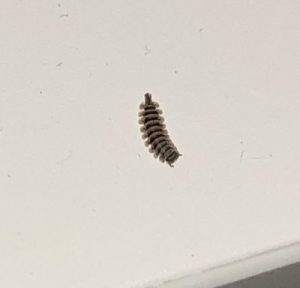 Now, in order to rid one’s home of these creatures, the most important steps are vacuuming your entire house and washing all fabrics in the house with extremely hot water. This will eliminate any eggs, larvae and beetles that may be residing there. If our reader feels the infestation is really getting out of hand, we recommend she contact a professional. We are aware she has already done this before, but perhaps now that she knows what the creature is, pest control can do a better job of permanently ensuring such an infestation does not occur again. On the other hand, there are steps our reader can take herself to further prevent infestations! These include: sealing off small cracks in the home where bugs can crawl though, regularly cleaning the house, vacuum-sealing unused clothing and replacing animal-made fabrics with synthetic ones. These last two steps will specifically prevent more clothes-eating creatures from coming.

In conclusion, the worms our reader found crawling on her walls and ceiling are most likely carpet beetle larvae. Infestations of them can be irritating to say the least, but luckily they all seem to be concentrated in one location, so getting rid of them should not be a problem!

Article Name
Tiny Worms Sticking to Walls and Ceilings are Carpet Beetle Larvae
Description
A woman in Poland is currently dealing with an infestation of hundreds of tiny worms inside her house. According to our reader, the worms are only found sticking to the top parts of her ground-floor walls and ceilings, are 1-2mm long (0.04-0.08-inches), and appear to be black in color with a segmented outer gray layer.
Author
Worm Researcher Anton
Comments: 0 Posted by: All About Worms Categories: Carpet Beetle Larvae, Pest Worms, Worms Found in the House