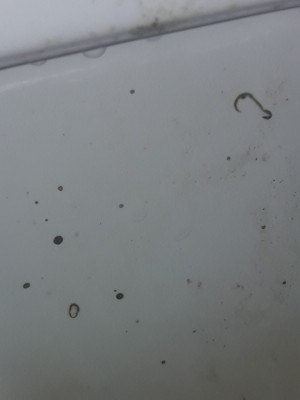 A man recently sent in this photo of two worms he found after going to the toilet. After being very bloated for a couple of weeks and showing other symptoms, our reader went to his doctor who told him they could be pinworms. However, our reader does not think they look like pinworms, as he has had those in the past and they looked different. 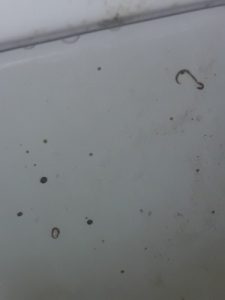 In addition to this, our reader reported that his doctor examined one sample of his faecal matter but found nothing, despite our reader having found these worms in his toilet, as seen in the photo. So the question is, what are these worms? We have to admit, this is one of the more trickier situations we have come across. On one hand, if the sample tested negative for intestinal parasites, then we would assume it was not a parasite and look for a different type of worm. However, on the other hand, our reader has shown symptoms of a parasite infestation, including bloating and “other symptoms.” It would have been very helpful if our reader had provided other symptoms in addition to this, but at the same time, as we are not medical professionals, we would not be able to provide a diagnosis or treatment in any case. Normally we would suggest seeing a medical professional, but seeing as our reader has already done this, there is not much more to be done other than follow the advice our reader’s doctor gave him.

However, we will of course try to identify the worm nonetheless. If it is a parasite, than it does resemble pinworms (also known as ‘threadworms’) the most out of all the common intestinal parasites. They are too small and thin to be tapeworms or roundworms, and are too large to be any of the microscopic parasites outlined by Medscape. Pinworms are the most common intestinal parasite found in the United States, and is also common in other countries. Children are often a target of this parasite, which come during the night to burrow into their rectums. Yet, when one has pinworms, one tends to see them in one’s poop or around the anus, not crawling on the sides of the toilet bowl.

So, if it is not a parasite, then the worm may be some other common worm that crawls up toilet pipes. The most common one that this worm resembles is a drain fly larva. Also known as moth flies, these critters often appear in bathrooms and kitchens, and are considered pests. They can carry toxic chemicals from where they breed in the pipelines. The larvae of these flies are generally 4-10mm (0.16-0.39-inches) in length and tend to have a black stripe on their backs. As the picture sent in is not very clear, it is difficult to tell if this worm is a drain fly larva or not. To get rid of them, one needs to clean out their drains as that is where their breeding grounds tend to be located. Especially clogged drains!

In conclusion, it is unclear whether the worms inside this man’s toilet are pinworms, drain fly larvae, or something else, especially given the situation at hand. If his doctor has not provided an accurate diagnosis, and treatment is not effective, we recommend that our reader consults a parasite specialist in his area to further advise him. As we are neither medical professionals, nor parasite specialists, this is not an area in which we can provide help. In the case that they are drain fly larvae, we recommend that he cleans his drains. Best of luck to our reader.

Article Name
Worms Inside Toilet Parasites or Something Else?
Description
A man recently sent in this photo of two worms he found after going to the toilet. After being very bloated for a couple of weeks and showing other symptoms, our reader went to his doctor who told him they could be pinworms. However, our reader does not think they look like pinworms, as he has had those in the past and they looked different.
Author
Worm Researcher Anton
Share the knowledge

This many people searched for this info: 4,382