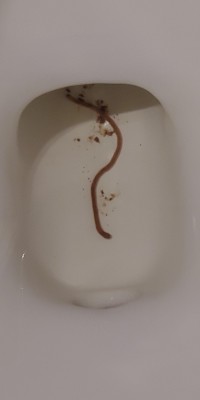 Long Worm Found in Toilet is a Lumbricus Rubellus Earthworm

A reader recently sent in this image of a long, brown worm she found in her toilet. She is trying to determine if the worm is an earthworm or an intestinal parasite. 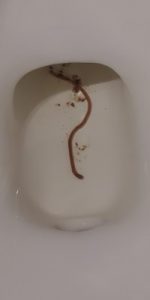 Our reader says that the last person to have a bowel movement was her seven-year old child the night before the worm was found in the morning. In addition to this, while she did originally think the worm was an earthworm, the discovery of a mouth that opened at one end of the worm put this into question as she did not recall ever having seen an earthworm do that previously.

Although it is not a daily occurrence, readers often write to us about finding an earthworm in their toilet. It could have crawled up through the pipes, although more often we suspect a small crack in the pipes which are underground. And that’s exactly what we think this is – an earthworm! Specifically, we think this is a lumbricus rubellus. This species of worm is native to Europe, but has spread globally as a result of human activity, such as the transportation of agricultural goods. They are usually brownish-red in color and can grow up to approximately 5-inches in length. We thank our reader for providing additional images which show, in great quality, the features of this worm, which match the description of the lumbricus rubellus. Additionally, earthworms do indeed have mouths, so that one should open its mouth is not improbable. 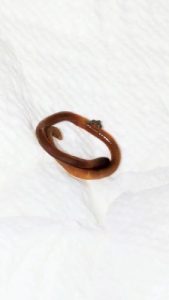 Lumbricus rubellus earthworms are most commonly found in forests, where they feed on organic matter, mostly soil litter. Even though they usually feed on surface litter, they have been known to burrow down to the rhizosphere, according to the Invasive Species Compendium of CABI. This is where most roots of plants are located, far below the surface. Thus, perhaps it is possible that the worm found its way down to a pipe and made its way in in this manner, as previously stated. If this is the case, it was most likely attracted to any organic litter it could compost in the pipes. For this reason, we recommend that our reader cleans her toilet regularly to avoid attracting all sorts of worms and creatures.

In addition to this, as earthworms are often used as fishing bait, it has been noted by the same source that the “discarding of fishing bait” (the worms) may be an explanation for the transportation of these worms to regions they are not native to. So, if our reader does not live near a forest, this may be another possible explanation of how it came to end up in her toilet.

Regardless of how this creature found its way into our reader’s toilet, it is our opinion that she has nothing to fear. Intestinal parasites tend to be smaller in girth than this creature (such as the flat tapeworm). This worm does not resemble any known parasites, but better resembles a lumbricus rubellus earthworm. These worms are harmless to humans, but are considered pests in forests as they may threaten biodiversity. Luckily, our reader’s bathroom is not a forest, so she need not worry about an infestation. Thus, it will suffice to remove the worm from the toilet and place it in a nearby grassy area (as long as there is soil for them to burrow into).

However, it should be noted that nothing can ever be said with 100% certainty. If our reader has reasonable cause to believe that her child, or anyone for that matter, is infested with any sort of parasite, we recommend contacting a medical professional and/or parasite specialist immediately to get an accurate diagnosis and proper treatment. As we are not medical professionals, this is not an area in which we can provide advice.

In conclusion, the worm that was found in our reader’s toilet is most likely a lumbricus rubellus earthworm! These worms are completely harmless and should not be feared.

Article Name
Long Worm Found in Toilet is a Lumbricus Rubellus Earthworm
Description
A reader recently sent in this image of a long, brown worm she found in her toilet. She is trying to determine if the worm is an earthworm or an intestinal parasite.
Author
Worm Researcher Anton
Comments: 0 Posted by: All About Worms Categories: Composting Worms, Earthworms, Fishing Worms