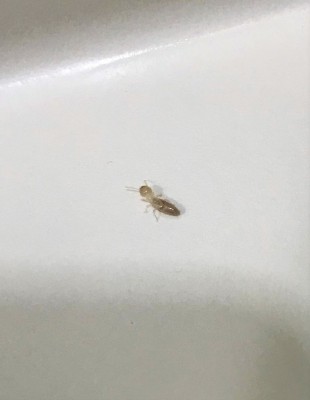 A reader who recently moved into a new home in Richmond, MO has been finding a lot of “little bugs” around her bathroom sink and wonders if we can identify the “pesty insect.” The insect in question is a glossy, brownish-gray transparent color, with six legs sprouting from its ovate body and a pair of antennae atop its round head. 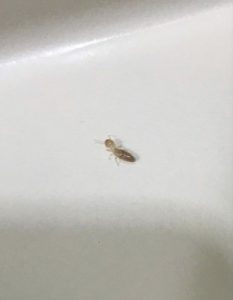 Our reader adds that Richmond is in the Northwestern part of Missouri, and her home is in “a large farming community with acres of corn fields, beans and the like growing around [her] property.” This is helpful to know, as areas located in more rural areas are bound to be more prone to a variety of insect species, simply due to the conditions of a natural landscape being more favorable to an insect than an urban community like a city.

When we first hear about bugs being found in or around a bathroom sink, the first thing we jump to is nearly always drain, or midge, fly larvae, but this critter does not resemble either. As much as we hate to suggest, the bug photographed looks like a worker termite. Termites are household pests that one definitely does not want to find in their home. This is because termites feed on the cellulose in wood and grass, and can thus weaken structural supports in homes that are made from wood. Termites are especially harmful because they form colonies. Like a bee colony, there is a queen termite, and the rest of the termites are given roles in their miniature society. There are soldiers (who defend the queen) and workers (who build the colony), hence why we called this one a ‘worker termite’. As they move in big groups, termite colonies can cause significant amounts of damage over time. Thus, given their small size and the rate at which they can reproduce, termites are best handled by professionals such as pest control.

That being said, we do question whether this is a termite as we cannot make out any mandibles (the claw-like appendages extending from a termites head that are used to cut through the wood they eat from). Alternatively, this could be a baby ant. Ants are insects of the order Hymenoptera, which is the same order that bees and wasps belong to. And like bees and wasps (and termites), ants are social creatures; they build vast structures in sand that they coexist in, which are referred to as ant colonies. The ‘ant hills’ that one encounters in nature are not actually the ant colony, but merely the entrance to them; the hill is made up of the detritus from the tunnels that have been excavated by the ants underground, where they actually live.

Ants may appear around one’s sink for a number of reasons. Usually, ants tend to infest kithen sinks more than they do bathroom sinks, because the crumbs and food residue in a sink attracts the ants and so they take up residence there as there will be a consistent source of food and water. When it comes to bathroom sinks, Scott English Plumbing’s page on ants in the bathroom suggests that ants can be “attracted to the scents and chemical odors that usually emanate from the drains of our home plumbing,” but that the organic matter that falls down the bathroom sink can also be a source of food for the ants, which can likewise attract them.

They also address the moisture ant, which is a category of ant which thrives in damp environments and whose presence can indicate moisture damage to the flooring or foundation of the home. They tend to be yellow in color when fully grown, but we could not find what they look like when newly hatched, as we assume the ant in our reader’s photographed is a newborn. Either way, our reader may want to get a professional opinion on the matter and consult with someone who can look into possible moisture damage in her home.

To eliminate a potential colony, Scott English Plumbing lays out a three step method. Firstly, one must investigate the source of food; what is it that is attracting the ants? In this case, it could potentially be a leak or moisture damage, as a worst case scenario. It could also be a build up of organic matter in the drains. Naturally, one should then, if possible, remove the source of food. Secondly, one should search for the trail the ants are following. By then folllowing the trail to its end, or beginning, one can find the actual colony itself. Thus, it follows that the last step is to get rid of the colony. Fortunately, there is a humane way of doing this that will successfully get rid of the infestation. One way of “eliminating the colony” that Scott English Plumbing suggests is leaving a cotton ball soaked in essential oils (specifically tea tree oil and peppermint) and cayenne pepper near the “source of the trail” to repel the ants and encourage them to move elsewhere. They do note that any essential oil should act as an ant repellent.

That all being said, if this does not prove effective, our reader might have to resort to less humane methods of removing the infestation, such as calling an exterminator. These infestations are not to be taken lightly. Ant eggs are laid by the thousands (daily, in the case of some species such as the fire ant), so any eggs, larvae, pupae or adult ants unaccounted for can just rebuild the colony and the infestation continues. In addition to this, the queen ant (who lays all the eggs and keeps the colony thriving) can, in some cases, live up to 30 years, and if managed properly, an ant colony survives as long as its queen.

To prevent future infestations, we are taken more rules out of Scott English Plumbing’s book. They suggest two pretty straightforward ways of ensuring that one’s bathroom stays free of ants. These are methods that we consistently advocate for as well when we write articles on bathroom pests, the first of which is to seal any cracks in walling and flooring in the bathroom. This not only keeps insects out, but it also keeps water in and can help prevent leaks into the foundation of the house, which in turn can create rot (if the foundation is wooden) or some form of moisture damage. Secondly, they suggest simply keeping the bathroom clean, which is essential to preventing infestations of all kinds of bugs.

In conclusion, the “little bugs” our reader has been finding around her bathroom sink could either be termites or ants, and likely newly hatched ones, given their lack of coloration. Hopefully that means that the infestation is new and our reader can deal with the problem quickly! To deal with termites by oneself is an extensive and potentially grueling task, and so we just recommend that our reader contacts a professional in the case that these are termites. As ants are easier to deal with by oneself, we have provided far more information on them. We really advise that our reader check out Scott English Plumbing, as they go into far more detail about all of the methods of controlling ant infestations in the bathroom. Our reader will find alternative methods, recipes for home remedies, and more. It is really an excellent resource, and they also have an chat service where one can ask about any issues and they will text back their answers. We hope that this article proves useful to our reader, and that she is able to locate the source of the issue and get it fixed. It is definitely a shame that this is happening in her new home so soon after moving in, so we hope that this is resolved as soon as possible so that she may enjoy her new home to its full extent.

Article Name
See-through Bugs Surrounding Bathroom Sink are Either Worker Termites or Ants
Description
A reader who recently moved into a new home in Richmond, MO has been finding a lot of "little bugs" around her bathroom sink and wonders if we can identify the "pesty insect." The insect in question is a glossy, brownish-gray transparent color, with six legs sprouting from its ovate body and a pair of antennae atop its round head.
Author
Worm Researcher Anton
Share the knowledge

This many people searched for this info: 1,443