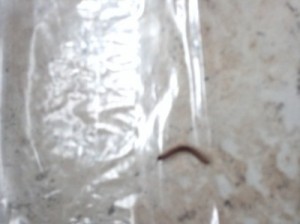 First, here is the picture the reader submitted along with her question:

While we always appreciate it when readers send in images, the picture above is unfortunately of limited use. As you can see, it’s quite blurry, and basically the only information we can gleam from it is that the palm tree worms are a brownish color, at least at this stage in their life cycle. It is unclear how big the worms are, and we also aren’t able to make out any distinguishing characteristics on their bodies.

To make matters more complicated, it isn’t clear if the relationship between the worms and palm tree is purely coincidental. The wording of the reader’s email seems to imply that there is a connection between the two, but this isn’t spelled out in any detail. Does the reader believe the worms were already on the tree before she brought it inside, meaning she brought the worms inside with her, or did the tree somehow attract pests (perhaps because it’s a potential food source) that were already somewhere in her house? This is significant because the worms you find inside are often not the type of worms you find outside. In any event, we presume there is some connection between the palm tree worms and the palm tree itself, or else the reader wouldn’t always find the former under the latter.

Somewhat unusually for a palm tree owner, our reader lives in Canada, and this does limit what she could have found. For instance, we are basically certain she didn’t find mealybugs, a fairly common palm tree pest, because these insects live only in warm, moist climates. (The adult and larval forms of mealybugs don’t really look like the creature pictured above anyway.) The reader also didn’t find cabbage palm caterpillars, as cabbage palms (the object of the caterpillars’ attack) don’t grow in Canada. Exactly the same logic can be applied to royal palm bugs, which only feed on trees (royal palms) that don’t live in Canada, and similar reasoning applies to the case of palmetto weevils, pests that only live as far north as South Carolina.

The only creatures associated with palm trees that seem anything like what our reader found are palm budworms, which are beetles who in larval form will feed on various types of fan palm trees. Some fan palm trees can be small, which means that they could actually be moved into a house, just as our reader did with her tree. The larvae are also about an inch long, which is consistent with the creature pictured above. The main thing that compromises this possibility is that palm budworm larvae are generally a pinkish and greenish in color, which doesn’t appear to be the color of whatever it is our reader found. For the record, it did occur to us that the creature our reader found has nothing to do with palm trees in particular, but this opens up far too many possibilities to reasonably explore. And again, the reader did imply there is a connection between her palm tree and the creatures she is finding, so we limited ourselves to palm tree pests.

You might have noticed that we haven’t mentioned any types of worms, and that is simply because the reader probably didn’t find a worm, despite our use of the term in the first part of this article. (The reader made no mention of this, but we suppose it is possible she found some sort of worm that was living in the pot of her tree. This is the only worm, strictly speaking, that we can imagine her finding.) Although the word “worm” can be used fairly broadly, it doesn’t make much sense to apply it to larvae, and we think our reader likely found some type of larvae. It is larvae that tends to afflict plants, not worms. That, however, is about all we can say.

Since we aren’t sure what our reader found, it won’t do us much good to explain control strategies, apart from offering the obvious (and probably unsatisfying) suggestion that our reader should take her tree outside. She brought the tree inside for the winter, so it will likely die if left outside. (On the plus side, the pests she is dealing with might die along with it.) For now, we encourage our reader to look into different larvae (not worms), and she can start by looking into palm budworm larvae. Maybe they are the mysterious palm tree worms.