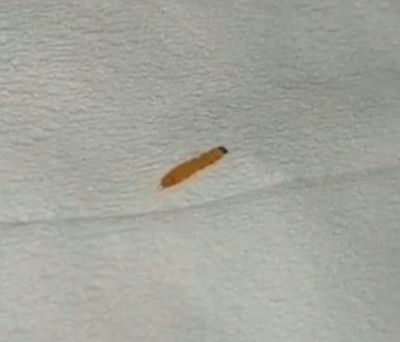 The brother of this reader found a worm in his cup of apple juice after leaving it to sit for half an hour. From the picture and our reader’s description, we can tell that this worm is tiny in size, orange in color, with a black head and a set of prongs at its rear. 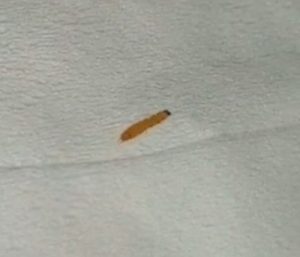 Our reader elaborated, saying that prior to discovering the worm, there had been no worm inside her brother’s apple juice. It does comfort us that her brother does not have a taste for apple juice with a hint of worm. She also stated that while she found a similar-looking worm on our website, she still was not sure what the worm might be. Our reader is correct though; we have written about this worm before. We believe this to be the larva of a scarlet malachite beetle.

Once fully grown, the scarlet malachite beetle gets no larger than 12mm, according to InsectIdentification.org, so the minuscule size of the larva makes sense (see image below of size comparison to our reader’s fingernail). In addition to this, the fully grown beetle is primarily black and red in color, but in certain lights will give off a green shimmer. This green shimmer is what gives the beetle its name; malachite is a green mineral that is popularly used in jewelry, or sold in mineral stores to be collected. As a larva, it often appears to be somewhat transparent orange, as in the photo sent in by our reader. 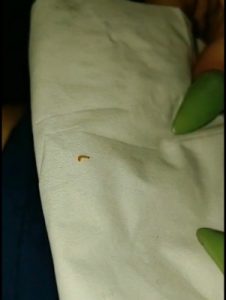 Scarlet malachite beetles are commonly found throughout all of North America, as well as in the Middle East and British Isles. In fact, the UK is making conscious efforts to conserve this priority species, as its existence is threatened by many problems, including poor habitat management. These beetles require vast, sunlit spaces to roam, and so we encourage our reader to simply move the larva outside. They are not pests, nor are infestations likely. Their diet is consistent of other insects, but not apple juice. The larvae in particular feed on the young of other insects, like: flies, wasps, and more.

Furthermore, scarlet malachite beetles also feed on pollen. Because of this, they can often be found around flowers. Hence, the reason this larva might have found its way inside our reader’s brother’s glass of apple juice is because it was attracted to the sweet scent of the apples, and its instinctual behavior kicked in, sending it crawling into this glass of apple juice.

To conclude, the larva our reader’s brother found in his glass of apple juice is a scarlet malachite beetle. This critter most likely ended up there by accident, and poses no threat to our reader or her brother.

Article Name
Scarlet Malachite Beetle Larva Found Inside a Glass of Apple Juice
Description
The brother of this reader found a worm in his cup of apple juice after leaving it to sit for half an hour. From the picture and our reader's description, we can tell that this worm is tiny in size, orange in color, with a black head and a set of prongs at its rear.
Author
Worm Researcher Anton
Share the knowledge