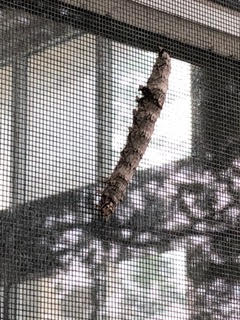 A woman discovers strange-looking worm on her window screen in Illinois and wonders what in the world it is. From the image sent in below, the worm appears to be brown or gray in color, with a grainy texture/pattern that makes it resemble tree bark. 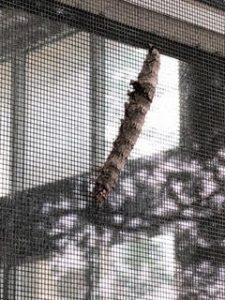 Our reader adds that she thinks it looks like a velvet worm, but that she knows they are more generally found in Africa and South America. In addition to this, our reader sent in a second image (below) of the worm’s underside, which showcases its “antennae-like protrusions”, as our reader puts it. Although we agree that this worm resembles a velvet worm to a certain extent, that is not what we think this worm is. It is rather its resemblance to tree bark that gives this worm away as an Ilia Underwing moth caterpillar.

Ilia Underwing moths (often referred to as Catacola ilia) are commonly found in the Eastern parts of the United States, including Illinois, and especially Chicago, which our reader said she was near. If our reader is interested, ButterfliesandMoths.org provides a map that shows the concentration of Ilia Underwing moths across North America. These moths live on trees, but specifically oak trees. These moths, as well as their larval forms, come in a variety of colors and patterns. This is especially true for the underside of the moth’s wings, which can be bright orange or red. It is for this reason they are called ‘Underwing’ moths. One can even notice these colors on the undersides of the caterpillars, which can be purple-striped, according to some sightings. Unfortunately, the photo sent in by our reader of the caterpillar’s underside is too dark to make out anything. 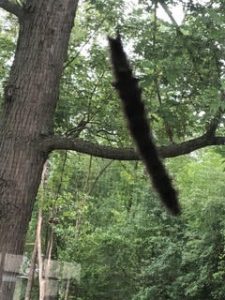 Strangely enough, there is barely any information on Catacola ilia online. But if we were to take an educated guess, we would say that their pattern is a product of evolution and acts as a form of defense mechanism. In camouflaging against the oak trees they live on, these moths, as well as their caterpillars, are able to hide from predators. Furthermore, these caterpillars can grow quite large, in fact, they can get as long as 4-inches according to some sources. However, our reader should have nothing to fear. No source lists them as pests, but nonetheless, we encourage our reader to make sure all her window screens are in prime condition, just to make sure none of these critters wander into her home and lays eggs. Those larvae would likely become frantic trying to get outside to the trees! We also advise using some sort of protective gear, like gardening gloves, if handling these caterpillars. No one can be certain that skin-to-skin contact will not cause an allergic reaction, so it is better to be safe than sorry.

In conclusion, the worm our reader found on her window screen in Illinois was an Ilia Underwing moth caterpillar. These unique caterpillars are unfortunately not widely discussed, at least online, and perhaps that is because they are not a problem!

Article Name
Caterpillar on Window Screen in Illinois is an Ilia Underwing Moth Caterpillar
Description
A woman discovers strange-looking worm on her window screen in Illinois and wonders what in the world it is. From the image sent in below, the worm appears to be brown or gray in color, with a grainy texture/pattern that makes it resemble tree bark.
Author
Worm Researcher Anton
Comments: 0 Posted by: All About Worms Categories: Caterpillars, Worms Facts, Worms Generally