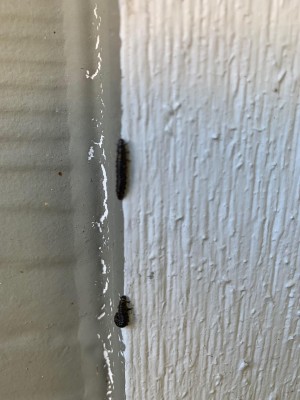 Multiple black worms were found crawling up the walls in the home of this concerned man. The worms appear to have segmented bodies, with six legs near their bulbous heads. 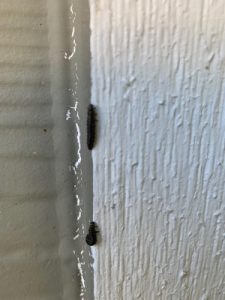 Despite its simple appearance, this larva proved a challenge to identify. Its segmented body indicates that this may be an arthropod (invertebrates part of the phylum Arthropoda, with segmented outer shells), and we thought it might be a beetle larvae. And although most beetle larvae have pincers at their rear, which discouraged us from chasing that lead, eventually we came to the conclusion that these worms were, in fact, green dock beetle larvae.

Unlike many beetle larvae, green dock beetle larvae do not possess pincers at their rear, which some might argue gives them less of a threatening appearance. Although being a solid, glossy black at their larval stage, once fully grown, green dock beetles are beautiful to behold (see image below). Their primarily green shell shines with a range of rustic oranges and yellows. Their names originates from their primary source of food, the dock plant. And the leaves of these plants are about the only thing they eat. For this reason, they should not be a pest, and it is odd that our reader found so many in his home. Our guess is that a pregnant green dock beetle wandered into our reader’s home and laid a cluster of eggs. 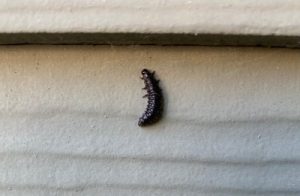 In relation to this, our reader wondered if these little critters are invasive, and whether they are the ‘bad guys’, or the ‘good guys.’ Given their diet and nature, beetles are not invasive, an obvious exception being the carpet beetle. Nonetheless, this species of beetle should not be a bother, and simply removing them from his home should suffice in dealing with the problem, as they should not be attracted to his home. That is, unless our reader is cultivating dock in his home. We also advise our reader to ensure that all possible cracks in walls, floors, and window screens are sealed, so as to prevent any more creatures from accidentally wandering into his home.

Furthermore, green dock beetles are primarily found in the UK and other parts of Europe. Our reader did not inform us of his location, but if he is nowhere near these parts of the world, then we may be incorrect in our identification. Because of this, we encourage our reader to keep one or two of the larvae in a container with some air holes and food, and wait to see what they grow into. The more they mature, the more distinct characteristics will be noticeable that will make it easier to identify them. Likewise, if our reader finds that the influx of these creatures does not stop, and that they are, in fact, infesting his home, adopting this method is also a good idea. That way, he will know that the creatures are, and can take the appropriate measures in dealing with the infestation.

In conclusion, the creatures our reader found crawling up the walls of his home are fortunately ‘good guys.’ Green dock beetles are peaceful, dock leaf eaters, and would only be considered pests if one was cultivating dock plants. Otherwise, our reader has nothing to worry about!

Article Name
Green Dock Beetle Larvae Crawl Up the Walls of this Man's Home
Description
Multiple black worms were found crawling up the walls in the home of this concerned man. The worms appear to have segmented bodies, with six legs near their bulbous heads.
Author
Worm Researcher Anton
Share the knowledge

This many people searched for this info: 1,226