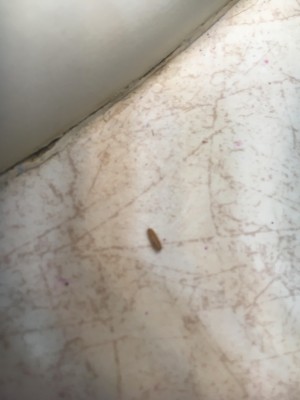 A worm was found on the shirt sleeve of this reader who wonders if we could help determine what it might be. Although the photograph is quite blurry, we can still discern the worm’s ovate shape and light brown color. 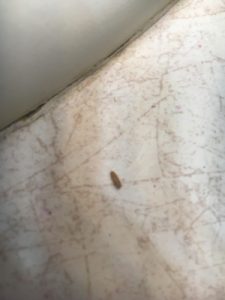 Our reader went on to clarify that the shirt was worn by her boyfriend prior to finding the worm and that the creature was discovered just after pulling the shirt from his clothes drawer. Hence, our first instinct would be to say that this is some kind of bug that feeds on fabric. The options for creatures that feed on fabrics, such as clothing, that are commonly found in the home are carpet beetle larvae or clothes eating moths. We would suggest it is the former, based on this worm’s brown coloration.

Carpet beetle larvae, when seen up close, are striped, being either black and white or brown and tan/yellow. They have bristles, as well as sets of forelegs that help them move about. Their head tends to be a different color from the rest of them, and quite bulbous, though proportionate to their bodies. And like the bug in this photo, their bodies are almost always oval shaped. Though some, like the black carpet beetle larva, can be longer, with a tail of multiple bristles that can be as long as their entire body.

Furthermore, it is the larvae of the carpet beetle that wreak the most damage in the household, as it is the larvae’s diet that consists of animal-based fabrics. Items they might infest include clothing (such as in the case of our reader), bedding, upholstery, and even abandoned bird’s nests in attics (where they can feed on the feathers of birds). In addition to fabrics, carpet beetle larvae have even been known to eat animal fur and human hair. Of course, we should mention that they pose no threat to animals or humans as they are neither parasitic, nor venomous. Carpet beetle larvae have also not been known to carry pathogens or diseases of any kind, so consuming them would generally be considered safe. So, if that sounds appealing to any of our readers, it’s free reign on carpet beetles!

If our reader has cause to believe her home is infested with carpet beetles (which is made apparent by more larvae sightings, or discoveries of droppings), there are simple steps she can follow to combat the infestation. As our reader did only find one, we will keep this part brief so as not to potentially waste her time, and if she wants more detailed information on how to rid her home of carpet beetles, she may consult one of our past articles on the subject.

Simply, to remove carpet beetle larvae, our reader must vacuum and/or clean out up any areas where carpet beetles might reside. These places are usually limited to dark, cramped spaces such as under furniture or in cupboards. Next, she will want to launder and/or steam-clean any fabrics that are animal-based, or even partly animal-based. To prevent future infestations, we recommend keeping up with consistent vacuuming and general housekeeping in order to prevent infestations before they even happen, and to ensure that any cracks in walling, flooring or window-screens are sealed where possible to prevent any bugs from wandering in.

To conclude, the worm our reader found on her shirt sleeve is a carpet beetle larva. While these critters are harmless to other animals, they can pose quite the threat toward one’s garments and textiles as infestations are common. If our reader does indeed find that she has an infestation of these larvae, we are sure that if she follows the methods listed above, with help from the article linked above, she and her boyfriend will be rid of these creatures.

Article Name
Ovate, Brown Worm on Shirt Sleeve is a Carpet Beetle Larva
Description
A worm was found on the shirt sleeve of this reader who wonders if we could help determine what it might be. Although the photograph is quite blurry, we can still discern the worm's ovate shape and light brown color.
Author
Worm Researcher Anton
Comments: 0 Posted by: All About Worms Categories: Carpet Beetle Larvae, Pest Worms, Worms Found in the House