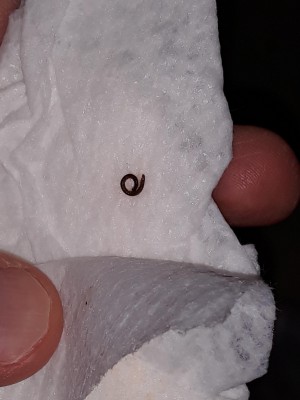 A dark-brown, segmented creature was found by this reader, who wonders if it is a drain fly larva or a millipede. The critter was found on our reader’s stovetop at night; it was not moving and the spot on the stove where it was found was dry. 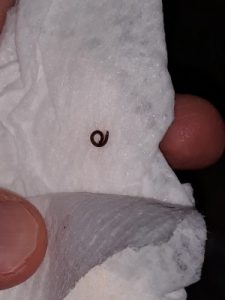 According to our reader, “the floor in the cabinet underneath the sink was worked on recently” which led him to believe that the creature was a drain fly larva or millipede as he knew they tend to “appear near sinks or wet places”. Furthermore, he is not sure whether or not the creature is dead, but only that it was not moving when he found it.

Firstly, we want to thank our reader for the excellent photograph, as well as the adequate amount of context provided. This makes it far easier for us to identify worms and thus give accurate information in our articles. Secondly, we think our reader is correct in one of his assumptions, that this is a millipede.

It is true that both drain fly larvae and millipedes prefer damp environments, and oddly enough, it was difficult for us to determine whether or not the creature in this photograph was either of the two creatures. That being said, we would go with this being a millipede, simply because the segments appear to be more defined and harder, like that of the millipede’s exoskeleton, something which drain fly larvae lack.

Millipedes come in various shapes, sizes and colors, ranging from black to red and from 1/4-inch to 15-inches, and commonly do they wander into people’s homes. They are not harmful to humans, as they are neither parasitic, nor venomous, though it should be noted that they can secrete a fluid that is potentially irritating toward the eyes and skin if touched, and also has a rancid odor. Millipedes are arthropods, meaning they are are invertebrates with a hard, segmented outer shell and have jointed limbs. Although many are creeped out by their presence, one should avoid killing them if possible as they are very beneficial to the environment. This comes as a result of millipedes being detritivores, meaning they eat dead organic matter, namely animals and plants, and ultimately recycle it, replenishing the nutrient levels in the soil they walk on and burrow into.

Furthermore, a millipede’s preferred habitat is one that is dark and damp, the moisture being especially significant to their survival. Therefore, one will often find them lurking in the basements, bathrooms or washing rooms of one’s home. Millipedes are more likely to wander into someone’s home on purpose rather than by mistake though. If there has been a particularly long dry spell, or rain season (it can go both ways), they will seek shelter in a building. However, they always want to return to the outdoors where they truly thrive, so they either usually do not stick around long, or they die. That is likely what happened to the millipede our reader found on his stove; it dried out. At first, we thought it might be adapting the defensive position millipedes take when they feel threatened or disturbed, but then the millipede would be curled up more tightly in a C-shape.

To conclude, the creature our reader found dead atop his stove is a millipede. These creatures are nothing to fear, though naturally finding bugs on one’s stovetop will never be a pleasant experience. If our reader finds any more millipedes in his home, we urge him to place them outside, and ensure that there are not any cracks or holes in his home that are not sealed from future invasions of creatures of all kinds.

Article Name
Segmented, Brown Worm on Stovetop is a Millipede
Description
A dark-brown, segmented creature was found by this reader, who wonders if it is a drain fly larva or a millipede. The critter was found on our reader's stovetop at night; it was not moving and the spot on the stove where it was found was dry.
Author
Worm Researcher Anton
Share the knowledge