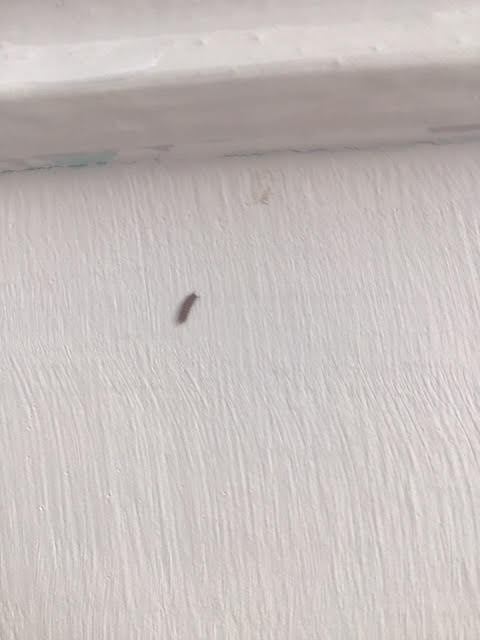 “Strange black worms” have been appearing all over the bedroom walls of this reader in the South West of England. The worms in question appear to be minuscule in size, black in color, and sport a pair of antenna. 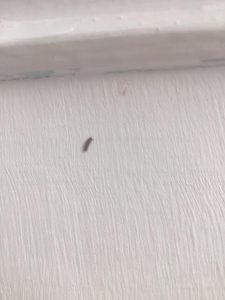 Although the photographs sent in by our reader are only of one worm, our reader states that she can find up to eight per day, with at least one showing up every day! She does not leave out water or food in her room and so she has no idea where the creatures may be coming from. She reports that her walls were repainted a few months ago, “which meant taking everything out and cleaning everywhere” which she “hoped might solve the problem”. Unfortunately, she states that it “feels like it’s gotten worse.” Our reader asks our help in identifying where the critters are coming from and how to get rid of them.

We must start by stating how troublesome this little critter turned out to be for us. Despite its rather plain appearance, this guy was hard to identify! The pairing of its ridiculously small size with the antennae really threw us for a loop. It is admittedly difficult to discern particular details from the photographs sent in; one has to zoom in quite a bit on the first photo (above) to see the antennae, and one can only make out the worm’s size and general shape from the second photo (below), though this is still very useful. Given its antennae and shape, we were almost tempted to assume it was a drain fly pupae, but this would not make sense. Drain flies stick to rooms where there are drains. Now, unless our reader has a random sink inside her bedroom, we do not think this is likely. 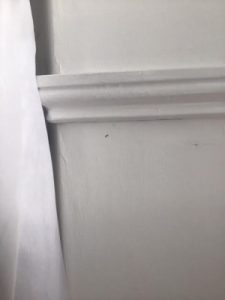 Our second guess was that it might have been a tiny centipede. However, this too is unlikely. The second photograph tells us that this critter really is very, VERY tiny. In the extreme sense. The smallest centipede in the world, known as Hoffman’s dwarf centipede, measures up to about 0.4-inches (1cm) and this bug does not even look to be that long. Plus, there is so little information about this centipede (having only been discovered in 2002 in New York City), and no records show that it is present in the UK, let alone as common as our reader’s culprit seems to be.

It saddens us to say that due to its extremely tiny size, we will not be able to provide a confident identification of this species. It could be that this is an underdeveloped larva of some kind, or even a very tiny insect of sorts, but we just cannot say anything for certain. Regardless, we can still shed some light on general tips for finding out where an infestation of bugs is coming from, as well as how to get rid of bug infestations.

In terms of learning where a certain pest is coming from, one should scour one’s entire home for a source. Given that the bugs are most concentrated in our reader’s bedroom (which is a sign to look out for when trying to eradicate bug infestations), we think the source is somewhere within the bedroom. Lots of bugs will love to settle down in dark, cramped spaces. This could be inside a cupboard, behind/underneath a piece of furniture, or between the folds of clothing. The source will be indicated by clusters of eggs and/or larvae. However, given how small this critter is, the source may not be visible to the naked eye, which makes it more tricky. Thus, what we would suggest is that our reader perform the classic frantic clean.

Our reader did mention that she did a deep clean a few months back when repainting her walls, but that was a few months ago. Regular housekeeping is, of course, paramount in preventing infestations. When it comes to dealing with one in the moment, the frequency and thoroughness of those cleanings needs to be upped. Cleaning every day for a week or two (including vacuuming and disinfecting surfaces) should help to control current infestations, as it makes the room less habitable for bugs and will discourage them from continuing to come. Remember to look in spots one would not think to look! Like in the corners of one’s bed frame, for example!

Naturally, if our reader would like to know the specific identity of this creature, we urge her to capture a few of these bugs and put them in a container with air holes and food. This way our reader can wait and see if the bugs mature and grow to a larger size. Once they have grown more, unique physical traits will show up clearer, and then our reader can send in new photos to us so we can have another go at identifying these critters! In that vein, we suggest trying different types of food, as we do not know its diet. This could be leaf litter, rice, fruit or even a bit of cloth which is at least partly animal-based.

To conclude, we are not sure what our reader has been finding on her bedroom walls. Although this tiny critter eluded us, we hope that the advice given to our reader will prove useful, and that the little black bugs will not be able to elude the power of consistent cleaning. If any of our readers have any ideas as to the identity of these worms, please let us know in the comment section! Otherwise, we wish the best of luck to our reader!

Article Name
Mysterious Black Worms with Antennae Roam the Bedroom Walls of England Resident
Description
"Strange black worms" have been appearing all over the bedroom walls of this reader in the South West of England. The worms in question appear to be minuscule in size, black in color, and sport a pair of antenna.
Author
Worm Researcher Anton
Comments: 0 Posted by: All About Worms Categories: Worms Facts, Worms Found in the House, Worms Generally