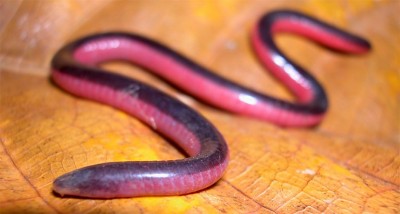 Ginormous worms or slimy snakes; what are these translucent, pink worm-like creatures that no one has heard about? The answer is: legless amphibians, a class of amphibians only discovered in the late 1900s. 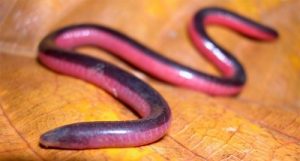 Caecilians, more commonly referred to as ‘legless amphibians’ are exactly what they sound like they are. What some sources refer to as a horrifying monster out of a horror film is actually a peaceful, underground-dwelling amphibian which prefers not to be seen by people at all. Unlike earthworms (which they can resemble), caecilians are vertebrates, meaning they have a backbone. And since they are amphibians, they are more closely related to frogs and salamanders than any worm. These creatures come in various colors and are found in the tropics of India, Mexico and regions of South America and Central Africa. They specifically prefer to live in loose leaf litter or soil with damp conditions. Some have even been found to live underwater. What sets caecilians apart from other amphibians,
, such as frogs, is that their young hatch as ‘small adults’. With exception, there is no larval stage that caecilians pass through after hatching. The eggs of caecilians are thus quite large. Certain species of caecilians lay their eggs in holes near a body of water (some of these species being the exception to the ‘no-larvae’ rule), while other species will have the mother nest with the eggs underground for several months until they hatch.

Furthermore, it should be noted that while legless amphibians pose no threat toward humans, according to the San Diego Zoo’s website, caecilians have rows of ‘needle-sharp’ teeth which they use to eat worms, lizards, other caecilians and even small snakes. Thus, although it is unlikely, if one of our readers were to happen upon a caecilian, they should be cautious when handling them, so as not to get bitten. Additionally, caecilians swallow all their prey hole, thus begging the question of why they need all those needle-sharp teeth, though it is highly doubtful that a caecilian would swallow a human whole. This is because it would be demonstrably impossible.

Moreover, given that these critters live underground, their habitats are under constant threat due to the deforestation of tropical forests to make way for mono-cultures of cattle or other mass-produced products. Of course, it took us so long to discover this species because they stay underground for pretty much all of their lives and never show themselves, and thus it would stand to reason that one could destroy a caecilian’s habitat unknowingly. On the other hand, those who enact the destruction of rain forests for the sake of mass production and economic growth tend to not have any qualms about destroying natural habitat to begin with. Furthermore, according to the San Diego Zoo, those caecilians which do show themselves are often mistaken for snakes and “killed on the spot.” In fact, in regions of India, it is locally thought that caecilians are especially venomous snakes, and are killed for that reason. It is unfortunate that, just as in many cases, a surplus in misinformation has led to a hysteria which aids in the endangerment of an animal.

To conclude, legless amphibians, or caecilians, are neither worms, nor snakes. They are harmless creatures who simply wish to live underground, undisturbed. One should not fear them, and one should not kill them if they discover one. Their preservation is important, just as for any animal, and even if they were worms or snakes, that nonetheless does not provide justification for killing one.

Article Name
Legless Amphibians: What are They and Should We Be Afraid of Them?
Description
Ginormous worms or slimy snakes; what are these translucent, pink worm-like creatures that no one has heard about? The answer is: legless amphibians, a class of amphibians only discovered in the late 1900s.
Author
Worm Researcher Anton
Share the knowledge

People helped by this info: 950