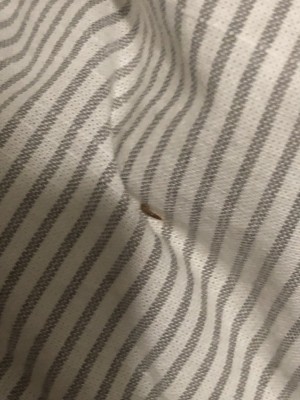 Five bugs/worms were found by this reader which are “brown to dark brown” in color. Our reader says she searched our site and read through our articles but could not find any information on what she was looking for.

In addition to her query, our reader provided two photographs of one of the worms in question. Unfortunately, both photos are quite blurry, and it is difficult to see small details on the worms that might give away their identity. What we can make out is that this worm is a solid brown color and has an elongated body which can bend in multiple ways (see the second image below). Of course, if the photo was crisper, we might pick out that the worm is not a solid brown color, but in fact striped. Alas, we cannot know these things. What we can do is work under the assumption that it is a uniform brown, but leave room for guessing at what it might look like. 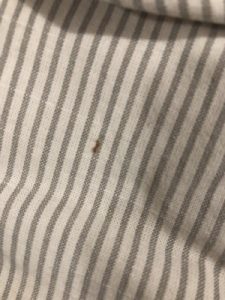 So, with the photos giving us little room to work with, and no context provided, what can we say about the worm, and what conclusions can we come to with so little information? Firstly, although we do not know where the worms were found, the worm in the photos seems to be atop some kind of material. If we were to assume that the worm was found on this piece of material, this might tell us things. It would tell us that perhaps the worms feed on materials, like a clothes moth larva, or a carpet beetle larva. Out of these two insect species, we would go with the latter. Carpet beetle larvae are destructive pests that feed on virtually any material that is completely, or even partially, animal-based. They can be a great nuisance as they are good at hiding between folds of clothing and in dark, cramped spaces, and can go unnoticed for a long time. Getting rid of an infestation of carpet beetle larvae takes consistent and vigorous vacuuming of infested areas, as well as laundering of potentially infested garments and other textiles. If we assume that these are carpet beetle larvae, then we are assuming that we cannot see that the worm in the photo has stripes and bristles, as these are two characteristic qualities of a carpet beetle larva.

Secondly, if we decide to be strict and work only with what the photo tells us, and not believe that there may be stripes or bristles that have gone unnoticed, we would start looking for other brown critters like this one that would commonly enter a home in a group of five or more. Given the thin, long shape of these worms, we might suggest that these are millipedes. Millipedes are natural decomposers of the environment, meaning they chew up dead organic materials (such as leaf litter or mulch) and in turn produce a nutrient-rich fertilizer via their waste products. They are largely considered environmentally beneficial, but unfortunately get a bad reputation as being creepy due to their multitude of legs that sprout from every segment of their body. That being said, when it comes to the smaller species, their legs go largely unnoticed due to them being on the underside of their bodies (unlike a centipede’s, whose legs are on the sides of their bodies and very much visible).

Sometimes, groups of millipedes can be found inside a home when they go looking for shelter from the outdoors. They tend to seek out damp and cool locations, and will more than likely be found in one’s basement, or even garage. Millipedes can also be difficult to get rid of, and unlike with carpet beetle larvae, there is not a solution to actually ridding one’s property of them (besides physically relocating each and every millipede one finds). To control millipede infestations, one has to take preventative measures, which include removing any organic matter that might attract millipedes and/or sealing any cracks in one’s home through which small creatures could crawl.

In conclusion, the identity of the five brown worms our reader has found is inconclusive. Out of all the common, brown worm-like creatures that tend to roam people’s homes, we would say that it is most likely that the critters are either carpet beetle larvae or millipedes. Neither bug is harmful to humans or pets, though they can be a nuisance and are understandably not welcome guests in the household. If our reader were to have further questions, or sharper images of the worms, she may feel free to contact us again. Otherwise, we wish her the best of luck!

Article Name
Dark Brown Worms are Either Carpet Beetle Larvae or Millipedes
Description
Five bugs/worms were found by this reader which are "brown to dark brown" in color. Our reader says she searched our site and read through our articles but could not find any information on what she was looking for.
Author
Worm Researcher Anton
Share the knowledge