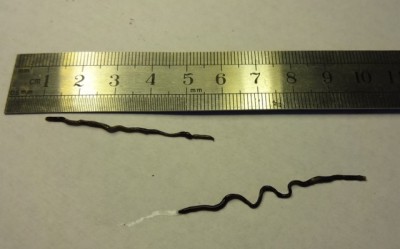 “I found hundreds of these worms on my covered walkway,” says this reader about the glossy creatures seen in the photographs below. The “specimens” are about 5-6cm (approximately 2 inches) long, “very dark brown to black”, have “no obvious mouth parts at the moving end” and “seem to survive fine in water.” 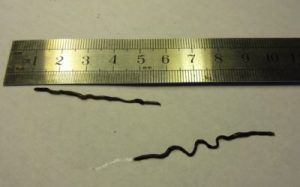 Our reader writes to us from Cocoa, Florida after finding these worms congregating along the South-facing wall of his walkway, as well as in “any corners they could find.” In response to his discovery of the worms, our reader cleaned the worms off his walkway and sprayed it with ant killer to prevent the worms from coming back. Unfortunately, it had the reverse effect, and “a week later hundreds were back.” Upon finding them again, our reader hosed the worms off and scrubbed his walkway with soapy water. The worms did not make it easy, as they seemed “to hang on at one end, making them hard to dislodge.” He adds that the worms in the photos are likely “damaged” seeing as he used tweezers to pick them up. His first guess was that these were horsehair worms, but he concluded that the worms were too short. Then he thought they might be hook worms, but reasoned that these worms were too big. Finally, he states that any thoughts on our part would be appreciated. 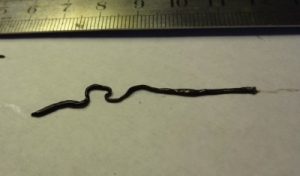 We can confirm that these are definitely not horsehair worms, nor are they hookworms. Some of the reasons for this that our reader mentioned are entirely valid, but it should also be noted that horsehair worms do not move in groups, and tend to stick to bodies of water during their adult life (after they have left an insect host). The glossy, black color and seemingly flat body has us thinking these might be New Guinea flatworms, but we are not entirely confident in this identification. We have covered New Guinea flatworms before, and while these worms our reader found do fit the bill in terms of physical description, the sheer number of worms is surprising and unusual. Then again, seeing “hundreds” of any worm would be surprising, unless it were some worm-like creature that does move in groups, such as the armyworm.

Nonetheless, our best possible guess is that these are New Guinea flatworms. These are terrestrial flatworms that are predatory in nature, meaning they eat other animals such as snails, insects and other flatworms. Their introduction to the United States from New Guinea caused quite the controversy, and many are afraid of them. They think the New Guinea worm will give them the rat lungworm parasite, despite it only being transferable from such a worm via consumption. Otherwise, the main threat these worms pose is to the extinction of certain snail species, whom they love to hunt. Flatworms have been known to secrete various substances, usually which are meant to incapacitate their prey in some manner or another, and this is probably what the clear liquid is in the photographs. Now, why our reader has so many of these worms on his walkway is a mystery to us. Perhaps there are a lot of snails that go across our reader’s property, or perhaps the living conditions are remarkably favorable. We suggest that our reader contacts pest control or some other qualified help to deal with this, if it continues; problems of this magnitude are best handled by professionals. 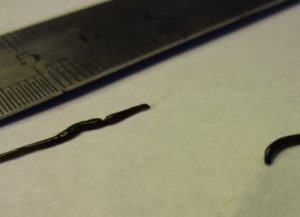 To conclude, the worms our reader found by the masses on his walkway in Cocoa, Florida may be New Guinea flatworms, though we are not entirely sure. If our reader notices anything new or has updates for us, he is welcome to write to us in the comments section below. Likewise, if any of our other readers have any clues as to what these worms might be, and if they truly are New Guinea flatworms, they too are welcome to share anything with us in the comments section. Otherwise, we wish our reader the best of luck!

Article Name
Glossy Black Worms Found by the Hundreds May Be New Guinea Flatworms
Description
"I found hundreds of these worms on my covered walkway," says this reader about the glossy creatures seen in the photographs below. The "specimens" are about 5-6cm (approximately 2 inches) long, "very dark brown to black", have "no obvious mouth parts at the moving end" and "seem to survive fine in water."
Author
Worm Researcher Anton
Share the knowledge