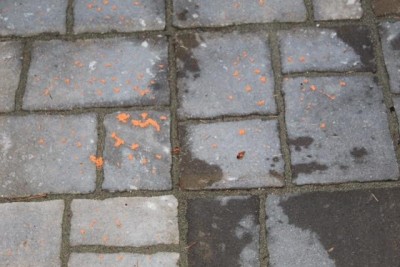 One of our readers left his home to find a bunch of small orange creatures on his patio. This was after the first rainstorm of the season in his home in Lake Forest, Washington (where it rains a lot). The specimens were clumped in piles, and some were eating a pinecone that had fallen to the ground as well: 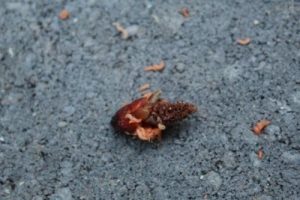 He thinks that they probably fell from the tree when it was raining. In his backyard there are various pine trees, so the creatures and pine cones could have fallen from any of the trees.

The specimens are a few millimeters long and pale orange. We believe these are larvae! We think they might be grubs, which are the larval form of beetles, or caterpillars, which are the larval form of moths and butterflies, or pine sawfly larvae, which mature into wasps. The creatures are tiny in the photos, which makes it difficult to count how many legs they have (if any), or notice details about the head. Also, while they are definitely more 0range than cream-colored, the coloring of larvae can easily be influenced by what they are eating.

Since these larvae fell from pine trees, we think they are most likely pine sawfly larvae. Mature pine sawfly larvae drop from trees when they are ready to pupate. After falling to the ground, they burrow into the soil, and wait out the winter. Then they pupate and emerge as wasps. There are many different species of sawfly larvae. If the specimen our reader found are indeed pine sawfly larvae, no aggressive management is necessary to get rid of them, as the damage they cause is cosmetic.

In summary, one of our readers found orange larvae on his patio underneath his pine trees. We think these are probably a species of pine sawfly larvae!