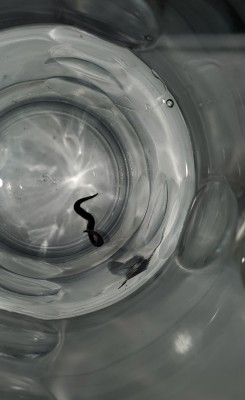 Finding this creature in his toilet caused this Floridian to “freak out a bit.” The creature in question appears to be a dark brown/black on its topside, and has a lighter, grayish underside. He asked his “biologist friend” to take a look at it, who said it looked like a New Guinea flatworm. 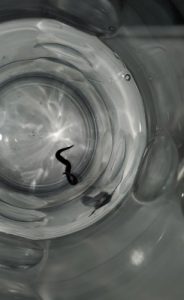 For context, our reader found this worm-looking fellow in his toilet after flushing it. After putting the worm in a glass (as seen in the photograph above), it proceeded to climb up the sides, and he reports that when the worm is submerged in swirling water, it “hangs on tight to the glass.” Our reader adds that though his friend is a biologist, he is not a worm expert. Despite that, his friend got it right on the nose, as this creature is indeed a New Guinea flatworm.

The New Guinea flatworm is a carnivorous, terrestrial flatworm that has had people all over the United States in a frantic state since its introduction — as an alien species — to the country. Luckily for our reader, the flatworm he found in his toilet is on the smaller side, as these worms can measure up to five inches in length. Regardless, the New Guinea flatworm, despite what many articles on the web will call it, is completely harmless, at least in terms of its direct impact on human health and safety.

As the name suggests, the New Guinea flatworm hails from the island of New Guinea, which is an island just north of Australia. It was purposefully introduced to many countries due to its efficiency in killing snails, who form part of the flatworm’s diet, in an effort to control certain species of snails that were damaging the ecosystem, such as the Giant African snail. Unfortunately, as is often the case, when you introduce an alien species to control another invasive or harmful species of animal, the alien species becomes invasive itself, which is the case for the New Guinea flatworm. This is because the New Guinea flatworm is so efficient at killing snails — or rather, draining them (as is their method of eating their prey) — that it has begun to threaten the survival of multiple snail species. And as snails form a vital part of most ecosystems, their eradication would not be exactly ideal.

Additionally, what many reports on the New Guinea flatworm will state is that since the flatworm is able to carry a certain parasite, namely the rat lungworm, it is indeed a threat to human health, but it should be noted that since the New Guinea flatworm does not bite or sting humans in any way, the only way this parasite can be transmitted is through eating the flatworm. So, it is not really fair to say that this creature is dangerous to humans.

As the New Guinea flatworm prefers moist environments, such as leaf litter and plant soil, the reason this one ended up in our reader’s toilet is likely because it made its way into the sewage pipe through an opening underground. There is no threat of infestation of the New Guinea flatworm inside a building, so our reader needs not worry about this possibility (unless our reader’s home happens to be a conservation site for snails). We recommend that he simply take the worm outside, in the glass it is already in, and leave the worm in a nearby area where there is soil or some kind of damp habitat that it would enjoy.

To conclude, the worm our reader found in his toilet is indeed a New Guinea flatworm. Although the worm poses a threat to the environment, it is not dangerous to human health (unless consumed), and so our reader does not need to freak out, and we hope that this article was able to calm him down somewhat. Our reader thanks us for our attention to this matter, and we likewise thank him for sending in his submission!

Article Name
Flat, Black Worm Found in Toilet is a New Guinea Flatworm
Description
Finding this creature in his toilet caused this Floridian to "freak out a bit." The creature in question appears to be a dark brown/black on its topside, and has a lighter, grayish underside. He asked his "biologist friend" to take a look at it, who said it looked like a New Guinea flatworm.
Author
Worm Researcher Anton
Share the knowledge