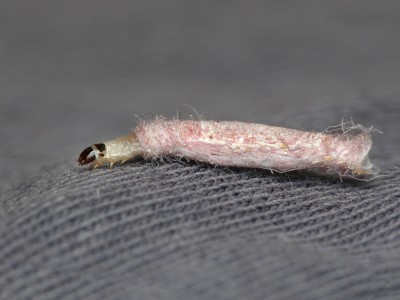 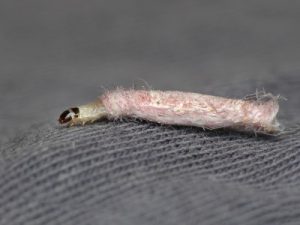 Another Tinea pellionella larva in its protective case. Photo by Patrick Clement (CC BY 2.0)

Case bearing moth larvae, also called casemaking clothes moth larvae, are common household pests. Their favorite food source is animal products, like feathers, felt, fur, leather, and wool, but they also eat plant products. They are considered pests because their feeding habits are destructive and an infestation can result in a lot of damage in your home. The larvae are rather unremarkable. They can be described like countless other larvae, they are small, white, and have a dark head. Therefore, they are more often recognized by the portable cases inside of which they travel. The larvae spin these silk tubes, the outside of it collects sand, dirt, and other small particles, becoming a protective shell. The inside of the case remains silky and comfortable for the larvae to live and grow in. Case bearing moth larvae drag these cases around with them throughout their entire larval stage, and then they attach it to a wall when they are ready to pupate. Before we address dealing with these larvae, we will introduce our next species, carpet beetle larvae: 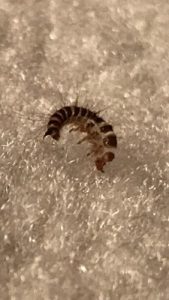 Carpet beetle larvae are the most common specimens that we write about here at All About Worms. Like case bearing moth larvae, they are also considered household pests, and for similar reasons. They have similar destructive eating habits and preferences as case bearing moth larvae, which is precisely why they are found in the same locations! Since their habitats and behaviors are so similar, getting rid of either of them requires the same steps.

The most common places that people discover carpet beetle larvae and case bearing moth larvae are in their bedrooms and closets. This is because those two rooms are where many items made of animal products are stored. Specifically, we are referring to the bedding in a bedroom and the clothes in a closet. If someone is dealing with either case bearing moth larvae or carpet beetle larvae, we encourage them to act fast and start the process of getting rid of them ASAP to minimize potential damage and the occurrence of a bad infestation. The first step is to identify the primary food source and have it removed. Once it has either been thrown out or professionally cleaned, we recommend sticking to a daily regime for 2-4 weeks. This should include doing laundry, vacuuming, sweeping, and dusting. Cleaning is the only way to get rid of these unwanted houseguests!

To sum up, we have explained why case bearing moth larvae and carpet beetle larvae are sometimes found together or near each other. Neither of these creatures is actually harmful, but they can be destructive and are therefore both considered to be pests.

Article Name
Discovering Case Bearing Larvae and Carpet Beetle Larvae Together
Description
We have explained why case bearing moth larvae and carpet beetle larvae are sometimes found together or near each other. Neither of these creatures is actually harmful, but they can be destructive and are therefore both considered to be pests.
Author
Dori Franklin
Comments: 0 Posted by: Worm Researcher Dori Categories: Carpet Beetle Larvae, Case Bearing Larva