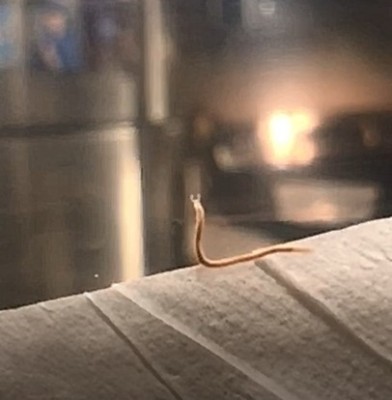 Curious little worms were found by this reader in their Texas home. The worms in question appear to have minuscule bodies, a clear pink/off-white coloration, and one pair of antennae. No legs are visible, and from the video our reader sent in, the worms wriggles and slithers to move about. 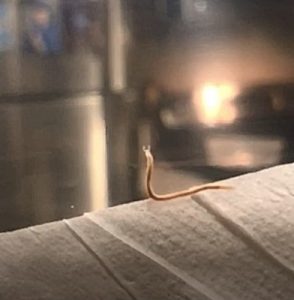 In addition to the video, our reader added a decent amount of context. They state that five such worms were found, most of which were found in the bathroom, and only one in the living room. They have a small dog who is on heart worm prevention medicine and is up to date on all its shots. Our reader is so worried about their dog that they might even “take her to the vet this week to be sure.” Our reader wonders specifically if this is a parasite, a centipede or a millipede.
Pink Worm with Antennae

First of all, there is the question of whether or not we can rule out a centipede and millipede. It is true that both of these species of arthropods have one defining characteristic: an unholy amount of legs, and the worm in the video does not appear to have any. While millipedes’ legs are underneath their body and would not be as easily detectable, centipedes’ legs sprout from the sides of their bodies, and would thus be very visible. Or would they? Given the transparency of this worm’s skin, and its size, the legs might not be visible in the video, or even to the naked eye at all. What has us question whether this is a centipede is the speed at which the worm in the video moves. House centipedes are incredibly fast, and can move at speeds of 1.3-feet per second!

That said, although millipedes’ legs are often not visible, and this might be the case for the worm our reader found, it nonetheless does not move like a millipede. If it would have as many legs as a standard house millipede would typically have, it would not slither and wriggle like the worm in the video does, it would simply walk, and perhaps look like it was just gliding over the surface it was walking on. We recommend that our reader contacts us again or comments down below how the other worms he found moved, and if any of them were able to swiftly dart away in the blink of an eye, we might have ourselves a centipede after all! What has us thinking this is simply the fact that the worm has antennae, a common characteristic of centipedes.

Secondly, this worm does not resemble any known parasites that are common to humans or dogs, and neither centipedes nor millipedes are parasitic. However, we do think that our reader is right in taking their dog to the vet just to be sure. Additionally, if our reader does experience any symptoms and has cause to believe it is related to the discovery of these worms, then we recommend consulting a medical professional immediately. They could even take a sample of the worm to a parasite specialist if they wanted to, to get a second opinion on its species and whether it is parasitic or not. To find one, our reader can simply do a Google search for ‘infectious disease physician (name of closest big city in Texas)’ or ‘travel disease doctor (name of closest big city in Texas)’.

Alternatively, our reader could keep a couple of these worms in a container with some food and air holes and wait to see what they grow into. Given their size, we think it would be safe to assume they are at an underdeveloped stage, and perhaps are newly hatched (which would explain why our reader found so many at one time). Once the worms have matured more, our reader can send in more pictures to us to get them ‘re-identified’. Otherwise, they could also take the samples to their local county extension office or to the entomology department at the nearest university to get an expert to look at them up close and identify them.

In conclusion, it is not clear what these worms are, but it is entirely possible that they are an underdeveloped centipede of some sorts. As we said, our reader can apply any of the plethora of methods listed above to obtain a certain identification, and they should feel free to contact us again with any additional queries or pictures.

Article Name
Curious Pink Worm with Antennae May be an Underdeveloped Centipede
Description
Curious little worms were found by this reader in their Texas home. The worms in question appear to have minuscule bodies, a clear pink/off-white coloration, and one pair of antennae. No legs are visible, and from the video our reader sent in, the worms wriggles and slithers to move about.
Author
Worm Researcher Anton
Share the knowledge

This many people searched for this info: 1,756