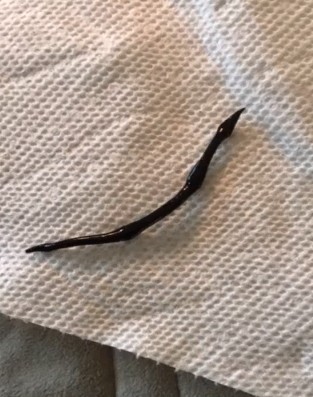 “Can you identify this creepy thing? Thanks!!!” is all this reader writes in his submission to us. The “creepy thing” he is referring to is the long, black worm pictured below, with bulbous bulges protruding from the length of its body. 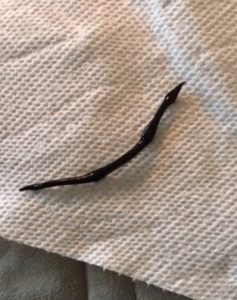 With little context, it is often difficult to identify any given creature in the photos that are sent to us, but in many cases just the photograph is enough. Yet, in this case even the brilliant photo has us stumped. The closest thing we think this worm resembles is a New Guinea flatworm. We have covered New Guinea flatworms before, as has the media; this is quite the notorious creature. New Guinea flatworms are predatory flatworms that live on land, and they can measure up to 5-inches in length. As a flatworm, they have long, flat bodies, the top side being the glossy, dark black that we see in our reader’s photograph, and the underside –which we cannot see here– is a murky gray. As the name suggests, the New Guinea flatworms hails from the island of New Guinea, and so this flatworm caused quite the stir when it was discovered on American and European soil.

Now, what makes us sceptical of this identification is the appearance of this particular worm. Although the color, glossiness and shape of the topside, as well as the length of the body, implies that this is indeed a New Guinea flatworm, its apparent tubular shape does not match that of the New Guinea flatworm. That is because this flatworm is supposed to be, well, flat. Then again, as seen in the video our reader sent in (linked below), the worm does move in a way that is realistic for the New Guinea flatworm, contracting its body back and forth to slide across the surface. All of this is to mean that we do not have 100% confidence in this identification, and we want our reader to take that into account.

In conclusion, the worm our reader found is likely a New Guinea flatworm, though we cannot say for sure. What we can say is that this worm does not resemble any parasite, nor any worm that is likely to infest a home, so our reader needs not worry about that. If any of our other readers have any ideas as to what this might be, or if they can confirm that this is a New Guinea flatworm, then we welcome their thoughts in the comments section below.

Article Name
Creepy, Glossy Black Worm is Likely a New Guinea Flatworm
Description
"Can you identify this creepy thing? Thanks!!!" is all this reader writes in his submission to us. The "creepy thing" he is referring to is the long, black worm pictured below, with bulbous bulges protruding from the length of its body.
Author
Worm Researcher Anton
Share the knowledge