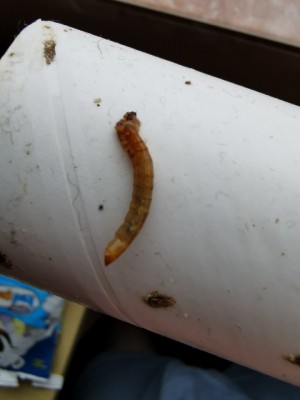 “What are these?” asks this reader of the creatures he found in an air vent where an old chimney used to be. From the pictures our reader sent us, there seem to be different creatures, one of which is a yellow, segmented, worm-like creature, while the other is a brown-striped, bristly bug of sorts. 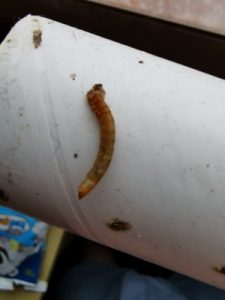 With regards to the former of the two creatures, our reader has only seen “one or two so far”, and “unfortunately both got squished when [he] was trying to get at them.” Our reader also wonders if the smaller of the two creatures is related at all to the larger ones. Now, to answer both of our reader’s questions in one go, the long, yellow worm-like creatures are wireworms, and the shorter, bristly bug is a carpet beetle larva, and no, they are not related in any substantial way. Of course, this depends on what our reader means by “related.” They are related in the fact that they are both the larvae of beetles (though different species), and they are related in the sense that they both seemed to be coexisting in our reader’s air vent. 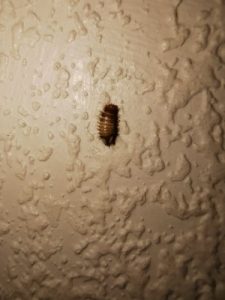 Wireworms are the larval form of the click beetle, of which there are many species. This is a relatively common critter, albeit one that makes people jump at times. Ironically, what frightens people about this beetle is its own ability to spring into the air, going up to 12-inches vertically. They do this when they feel threatened, or when they are flipped onto their backs. Naturally, the beetles do not always land the right way up, so at times one will have a beetle that jumps up and down several times before righting itself, which can be quite startling. When this happens, they emit a clicking sound that gives them their name. Now, while the beetles eat flowers and leaves, their larvae eat various things depending on the species. Some species eat at the roots of plants, and are thus usually found underground, while others can be found inside dead wood munching on other organisms. Of those species that do feed on plants, wireworms are most harmful to potatoes.

Meanwhile, carpet beetle larvae are also destructive, but not in the garden. These little guys chew up the fabrics in one’s home; anything that is even partially animal-based in its construction makes great fodder for a carpet beetle larva. Because of their small size and nondescript color and appearance, these creatures can easily disappear into the carpets they infest and go unnoticed for a long time. Thus, infestations can spread really easily, and can be quite irritating to eradicate. Luckily for our reader, it seems he only found the one. That being said, we recommend that he search his home for more, since infestations are probable. He should search under and behind upholstered furniture, in and under rugs and carpets, in between the folds of his clothing, his bedsheets, and any other cramped space where a carpet beetle larva could feed on textiles, hair, fur or feathers. If our reader does discover more and wants information on how to get rid of a carpet beetle infestation, he is welcome to check out this past article we wrote on carpet beetle larvae that will suggest some methods of tackling a carpet beetle larva infestation. 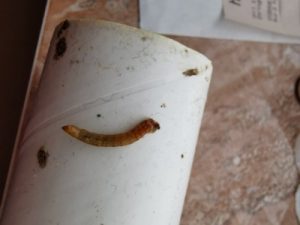 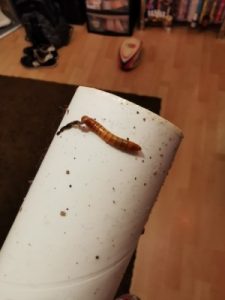 Why these two species of beetle ended up in our reader’s air vent is as much a mystery to us as it is to him. Since there used to be a chimney there, it could be that there is still some detritus in there that attracts the bugs. Perhaps there were some organisms that attracted the wireworms and some lint or fur that attracted the carpet beetle larva, but we cannot say for sure. We recommend that our reader take a look at his air vent, and clean it out as best as he can, so as to avoid attracting any more critters. As for the ones he found, we would say it is fine to put them outside. Wireworms will not infest the home, so our reader need not worry about that, but he should definitely keep an eye out for carpet beetle larvae.

To conclude, the creatures our reader found in his air vent are wireworms and a carpet beetle larva. Neither of the two are dangerous to humans in any direct way. We hope that this article helps our reader, and he should know that if he has any more questions for us, he is welcome to contact us again or leave a comment down below!

Article Name
Striped Worms Found in Air Vent are Wireworms and One Lonesome Carpet Beetle Larva
Description
"What are these?" asks this reader of the creatures he found in an air vent where an old chimney used to be. From the pictures our reader sent us, there seem to be different creatures, one of which is a yellow, segmented, worm-like creature, while the other is a brown-striped, bristly bug of sorts.
Author
Worm Researcher Anton
Comments: 0 Posted by: All About Worms Categories: Carpet Beetle Larvae, Worms Facts, Worms Found in the House