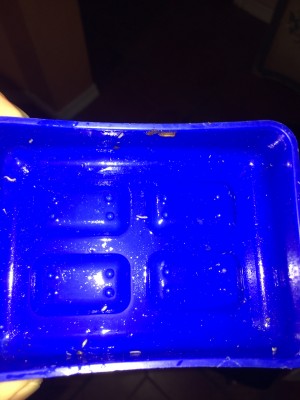 A reader recently wrote to us about some worm-like organisms she found in her kitchen. She explained that she found 8-10 of these tiny, cream-colored creatures in the soap dish she uses to hold a metal scrubber. She took a picture of the soap dish, but threw out the metal scrub brush and didn’t get a photo of it. She is worried that these creatures might be parasites and that they might pass on diseases. 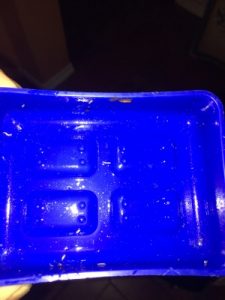 Wow, these specimens really are tiny! Based on their minuscule size, we believe these are probably larvae of some sort. Now on to the trickier question: what type of larvae are these? Our initial thought is that these are drain fly larvae. Drain fly larvae are common household pests that feed on decaying organic matter. They typically breed inside the film that builds up in a drain, but there is likely a similarly appealing environment on the metal scrub brush and the soap dish that holds it. Our hesitation on identifying these as drain fly larvae is that drain fly larvae don’t look as cream-colored as these specimens. Drain fly larvae have black stripes and are also sometimes covered in tiny hairs. Of course these could be drain fly larvae that just look more white than black, but we aren’t totally convinced. Our reader might have also found fly larvae, a.k.a. maggots. Maggots typically eat dead organic material such as rotten meat. So perhaps our reader used the metal scrub brush to clean a pot covered in meat, and a little bit of meat remained in the metal brush, flies then laid their eggs in that remaining meat, and then the eggs hatched and maggots appeared. Based on the photograph and information we have, we don’t feel confident determining if these are drain fly larvae, maggots, or something else. We are confident, however, that these specimens are larvae and not parasites. We think our reader just needs to focus on cleaning out her sink and kitchen, and doesn’t need to worry about disease transmissions. That being said, if she is seriously concerned about her health or believes she is ill, we recommend she see a doctor ASAP just to be safe. Since we are not medical professionals, we are not licensed to give medial advice!

To wrap up, we believe the cream-colored specimens our reader found are either drain fly larvae, maggots, or some other type of larvae. We don’t think she needs to worry about disease transmission, but if she is truly concerned then she should make an appointment with a doctor. We would recommend using an organic cleaning gel to thoroughly scrub out her kitchen sink and drain, as well as wiping down all the surfaces in her kitchen.

Article Name
Cream-Colored Worms in Soap Dish Aren't Parasites
Description
We believe the cream-colored specimens our reader found are either drain fly larvae, maggots, or some other type of larvae. We would recommend using an organic cleaning gel to thoroughly scrub out her kitchen sink and drain, as well as wiping down all the surfaces in her kitchen.
Author
Dori Franklin
Comments: 0 Posted by: Worm Researcher Dori Categories: Drain Fly Larvae, Worms Found in the House