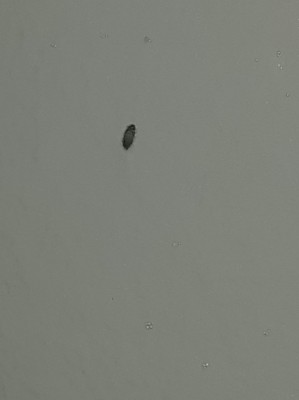 What Is “Maggot-Like Worm” In Closet?

A reader recently reached out to us about an organism he found in his closet. He described it as a “maggot-like worm” and said it moves very slowly. He said there isn’t any food in his closet, just clothes. He would like to know what the creature is, what he should do about, and if it is dangerous. Here is the photo he included: 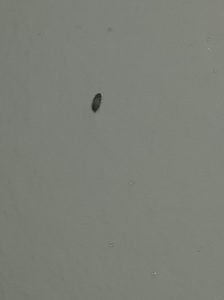 Having a photograph to look at is always better than not having a photo, but this photo is blurry enough that we can’t tell too much about the specimen in it. We can see that it is dark colored and sort of round, but that’s it. Based on its general appearance and the location in which our reader discovered it, we think it might be a carpet beetle larva, but we aren’t entirely sure. Carpet beetle larvae are the most likely “maggot-like worms” to be discovered in a closet full of clothes, but since the photo isn’t clear, we can’t confirm this with 100% certainty.

Carpet beetle larvae are small, rust-colored specimens covered in tiny, bristle-like hairs. They are common household pests that feed on a variety of items found throughout a home, including clothes! Assuming the creature our reader found is a carpet beetle larva, he will need to thoroughly clean his closet in order to get rid of it and any others. He will need to begin by investigating his clothing for the primary food source these larvae have been feeding on. He should search through all of his clothes for anything that shows signs of damage, or anything that is covered with additional larvae. This item should be removed immediately and either thrown out or professionally cleaned to ensure there are no more hidden eggs or larvae lurking on it. He should wash all of the other clothing in his closet for good measure. In addition to doing laundry, our reader should sweep, vacuum, and dust his closet to eliminate any other potential food sources. Cleaning is the only way to effectively get rid of carpet beetle larvae and to keep them from returning.

In conclusion, we think the creature our reader found in his closet is probably a carpet beetle larva, but we aren’t entirely convinced of this based off the photograph alone. Although they can be annoying and sometimes destructive, carpet beetle larvae aren’t usually considered to be dangerous.

Article Name
What Is "Maggot-Like Worm" In Closet?
Description
We think the creature our reader found in his closet is probably a carpet beetle larva! Although they can be annoying and sometimes destructive, carpet beetle larvae aren't usually considered to be dangerous.
Author
Dori Franklin
Comments: 0 Posted by: Worm Researcher Dori Categories: Worms Found in the House