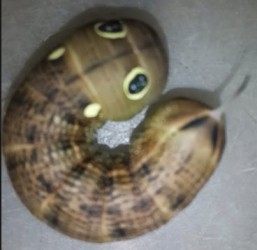 A reader in Algiers, Algeria wrote to us recently to ask about a “worm” he found in his garden. The worm is in fact a caterpillar, which may be one of the species of swallowtail butterfly caterpillar, which make up the family Papilionidae. With these two sentences, we’ve already supplied our reader with everything he wanted to know (and all we can really give him), but we’ll delve a little bit further into the subject to round out our answer, and also explain our rationale a bit more.

Probably the feature you noticed first about this caterpillar is that it has big black eyes. These actually aren’t eyes, but eyespots, which serve as a defense mechanism and aren’t related to the caterpillar’s vision. By making the caterpillar appear to be something it is not, like a snake, the eyespots can deter predators. Eyespots are relatively common among caterpillars, so one can’t reliably identify a caterpillar simply because it has eyespots. However, we still think there is a good chance our reader found a swallowtail caterpillar because these are common caterpillars with eyespots, and the creature above looks like the swallowtail caterpillars we have identified before. (For instance, our reader can compare what he found to what we believe is a Spicebush Swallowtail caterpillar that another reader asked us about. The Spicebush Swallowtail is a bright yellow color [at least in its final developmental stage], but apart from the color, the parallels between this caterpillar and the one above are obvious.)

However, in the world of caterpillar identification, naming the family of the creature in question is reasonably precise, and perhaps this degree of specificity is all our reader was looking for. (He did start out thinking he found a worm, so we at least pointed him toward the correct basic category of animal.)

We can’t be entirely sure he found a swallowtail caterpillar, but we think this is the most likely possibility, and hopefully that is all our reader cares to know.

Article Name
Caterpillar in Algeria
Description
A reader in Algiers, Algeria wrote to us recently to ask about a "worm" he found in his garden.
Author
All About Worms
Comments: 1 Posted by: Worm Researcher Evan Categories: Caterpillars