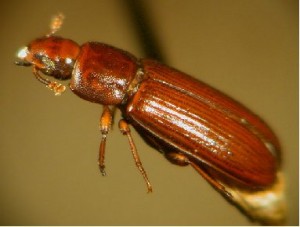 We received a very simple and straightforward question from a reader the other day on the All About Worms Facebook page. He said that he thought he found a flour beetle, and that he only needed a picture of a flour beetle to confirm his suspicion. This was easy enough to find – a quick search for “flour beetles” turns up thousands of images – so below we post a good picture we found, as well as provide some basic information about flour beetles.

First, here is a nice picture of a flour beetle:

The term “flour beetle” is actually fairly imprecise. It refers to the darkling beetles (i.e., the Tenebrionidae family) that belong to the Tribolium or Tenebrio genera, with the creature pictured above (Tribolium castaneum) belonging to the former genus. In case that is too much taxonomy to process in one sentence, we simply mean that the flour beetles are subset of the darkling beetles, and the point we wish to emphasize is that there are a broad range of beetles that can be called “flour beetles.” Of course, they aren’t all identical, so even if whatever our reader found doesn’t look exactly like the creature above – perhaps it a darker color, for example, or maybe its body is slightly squatter – it could still be a flour beetle.

It is also necessary for our reader to factor in the circumstances in which the beetle was found. Flour beetles, as their name imperfectly implies, feed on wheat and other grains, and in fact they are major pest of the grain industry. They are often found in cereal silos, but they can also be found in pantries. (Their larval form, mealworms, are also found in pantries with some regularity.) So, if our reader found the beetle in a bag of grain or some similar place, this would further suggest that he found some type of flour beetle.

Between the picture and our brief overview of flour beetles, we hope we have supplied our reader with all the information that he needs to confirm (or discard) his identification.

Article Name
What Do Flour Beetles Look Like?
Description
Below we post a good picture of flour beetles we found, as well as provide some basic information about these creatures.
Author
All About Worms
Comments: 0 Posted by: Worm Researcher Evan Categories: Pest Worms