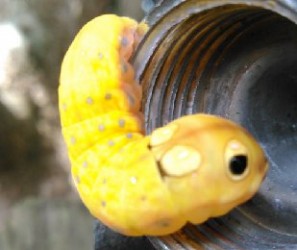 A couple of days ago a reader sent us an amazing picture of a yellow caterpillar with black eyes. (These “eyes” are in fact eyespots, which serve no optical function, but more on this in a moment.) She had found a couple of the yellow caterpillars on her back porch and was wondering if we might be able to help with the task of identification. Although caterpillars can be extremely difficult to identify because of the sheer number of different species, we are reasonably confident our reader found a Spicebush Swallowtail caterpillar, one of the hundreds of species of Swallowtail caterpillars.

First, here is the excellent picture our reader submitted:

In this picture, it looks as though the caterpillar is looking intently into what we think is a hose. Its big black eyes appear to be gazing into the dark tunnel, perhaps evaluating the prudence of venturing into parts unknown. The only problem with this story is that those big black eyes are not eyes at all. Rather, they are, as mentioned, eyespots, which serve as a defense mechanism and are unrelated to the caterpillar’s vision. We explain this in greater depth elsewhere, like in our article about red caterpillars with eyes, but essentially eyespots are an example of biological mimicry. (The eyespots “mimic” the appearance of actual eyes.) The eyespots make the caterpillar look either dangerous or inedible to their natural predators. Caterpillars with eyespots like the one pictured above look like snakes – the caterpillar’s appearance mimics that of a snake, in other words – thereby deterring predators like birds from attacking them.

2 thoughts on “Yellow Caterpillar with Black Eyes (or Eyespots)”