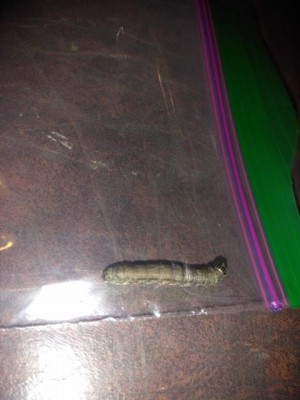 A reader reached out to us because she believes her sister was bitten by a worm-like organism. She sent us a couple of photographs and would like us to identify the creature if possible: 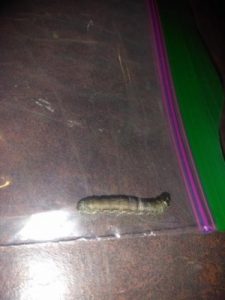 The specimen is probably just over an inch long. It is dark green with a darker stripe down its side and a black head. She also sent us a photograph of the specimen upside down: 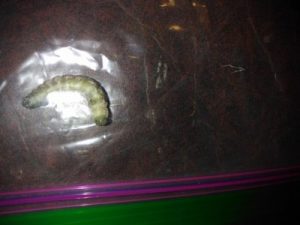 After examining both photos, we are confident that this organism is a cutworm. Cutworms are the larvae (or caterpillars) of several species of night-flying moths that belong to the family Noctuidae. They get their name “cutworm” because they are known to cut down young plants at the the surface (or sometimes below the surface level) while feeding. Other species of cutworms don’t “cut” young plants, but instead move up the plant and feed on the foliage, buds, and shoots.  When present in large numbers, they can be detrimental to a field of young crops. Since cutworms are general feeders, they attack and feed on a wide variety of plants. Some plants that fall victim to the cutworm include bean, cabbage, carrot, corn, lettuce, tomato, potato, pepper, and many more.

While the cutworm our reader found is green, others are brown, black, grey, or even pink! We aren’t sure which species of cutworm our reader discovered. While caterpillars aren’t necessarily known to bite, they can cause an uncomfortable sting, which could be what our reader’s sister felt. However, caterpillar stings are often the result of bare human skin rubbing against the spines of hairs of a caterpillar. Cutworms don’t have hairs or spines, but we suppose her skin might have simply reacted badly with the encounter. Caterpillar stings aren’t usually a serious injury, but if she is experiencing severe pain or bad blistering, she should contact her health provider.

In summary, one of our readers reached out to us about a green worm-like organism that bit her sister. We believe the creature in question is a cutworm! Cutworms don’t typically bite, but we suppose her sister’s skin could have reacted badly to the encounter.

Article Name
Biting Worm is Likely a Cutworm
Description
A reader reached out to us about a green worm-like organism that bit her sister. We believe the creature in question is a cutworm!
Author
Dori Franklin
Share the knowledge

2 thoughts on “Biting Worm is Likely a Cutworm”